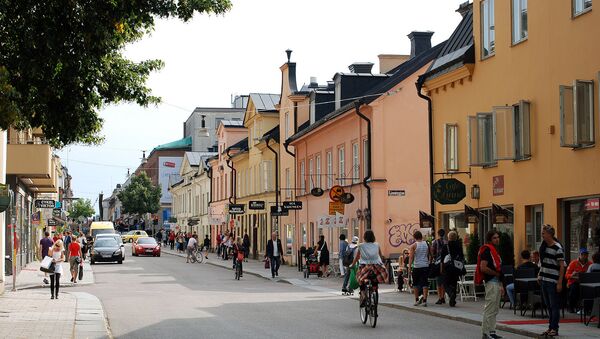 CC BY 2.0 / IK's World Trip / DSC_0098
Subscribe
International
India
Africa
Sometimes, a single minute can matter. Especially if one is a night owl who does the shopping late in the evening and always runs the risk of coming too late. An ICA store in the student-rich Swedish city of Uppsala knows exactly what we are talking about. This why it prolonged its opening hours, albeit with only one minute.

No Frills: Swedish Cops Shamed for Drinking, Posing in Tutus for Facebook
The ICA store in the student-heavy university city of Uppsala has perhaps the weirdest opening hours in the Kingdom of Sweden. The idea was to irritate the customers a little, thus gaining their attention. The peculiar and somewhat provocative idea was presented a few years ago by several employees, and has proved a big hit since.

"We have the longest opening hours of all groceries stores in Uppsala," shop assistant Fredrik Andersson told news outlet Nyheterna24.

"I would say that our opening hours are the biggest reason for our success in recent times. Besides the extra minute, we are situated in a campus area with many students who would like us to be open longer," he said.

Home Away From Home: Sweden Moves Arctic Town Being Devoured by the Earth
The ICA store has repeatedly tried to stay open around the clock and still wants to, but the trade union would not allow.

"Unfortunately, they are not really too smart about it. There would be many more jobs, but they do not even think along those lines. We would be able to offer more people employment, if we were allowed to stay open around the clock," Fredrik said.

ICA is one of Sweden's oldest retailers, which has been in business since 1938 and has subsidiaries across Scandinavia and the Baltic states. The ICA stores are renowned for their flexibility and the habit of adapting themselves to the market situation.

Last year, an ICA store in the Swedish province of Dalarna introduced Arabic signs in addition to Swedish to adjust to their customers and to make it easier for its personnel, who had come from Syria and were experiencing difficulties with the language.