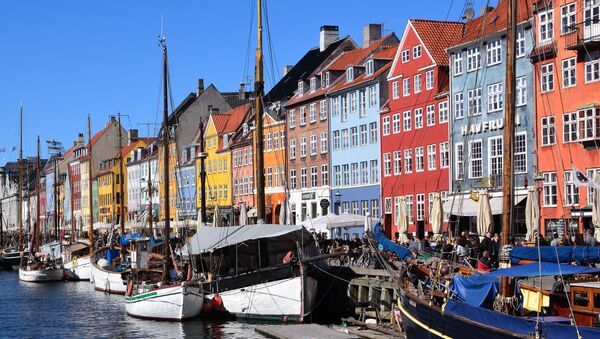 Ten years ago, the Liberal Party and the Danish People's Party defended the Danes' freedom of expression from a storm of international criticism amid the Muhammad cartoons controversy. Now, the same parties advocate restricting the very same freedom of expression in light of a highly controversial exhibition portraying terrorists as martyrs.

Copenhagen Caves In: Danes Cancel 'Satanic Verses' Play to Please Muslims
Last week, the highly controversial exhibition "Martyrs Museum" was opened by the Danish Theater Sort/Hvid with the idea to scrutinize people accepting death for the sake of their ideals. Among such figures as Joan of Arc, Socrates and Rosa Luxemburg, the exhibition featured two of the perpetrators of terrorist attacks in Brussels. Alongside a reconstruction of the pulpit from which Martin Luther King gave his famous "I have a dream" speech, the exhibition showed a ticket to the rock concert at the Bataclan in Paris, which turned into a bloodbath as Daesh terrorists killed 89 people.

Unsurprisingly, the exhibition gathered strong reactions in Danish society. Culture Minister Bertel Haarder of the Liberal Party said it was wrong to put suicide bombers in the same category as freedom fighters and socialist crusaders like Rosa Luxemburg and called the exhibition "insane."

"The next thing is that we should actually try and understand them," he told newspaper Politiken sarcastically.

Danish Police Find Exhibit Depicting Terrorists as Heroes Legal
Katrine Winkel Holm of the Free Press Society and the Danish People's Party culture spokesman Alex Arendtsen harshly criticized the exhibition as well, calling it "perverse" and pointing out the fact that the very definition of the word "martyr" suggests a Christian nature.

These negative reactions produce a marked contrast to the Muhammad cartoons controversy, when Denmark tried to emerge as a champion of freedom of speech. In 2006, the controversy quickly escalated into an international dispute, leading to anti-Danish riots in the Muslim world and a hard-hitting boycott against the Danish dairy products.

Remarkably, the majority of the Danish political establishment, including the then prime minister Anders Fogh Rasmussen of the Liberal Party, defended the cartoons against foreign criticism. Even the Danish People's Party former leader, Pia Kjærsgaard, was staunch in her defense of the cartoons. She warned against censorship and noted that Denmark's constitutionally protected freedom of speech "was not for sale for a liter of milk in Saudi Arabia."

Not Radical Enough? New Danish Right-Wing Party Sets Things Straight
However, the bombastic rhetoric slowly died down as the threat of home-bred terrorism started to seethe. Recently, concerns about terrorism have become a fixture in the cultural debate in Denmark. In spring, the Liberals and the Danish People's Party discussed a number of initiatives to ban "hate preachers" from the country in an attempt to crack down on the growing Islamist extremism in the country.

Ironically, Danish journalist Flemming Rose of Jyllands-Posten, the man who was principally responsible for the September 2005 publication of the cartoons that stirred the Muhammad cartoons controversy, remained as one of the most stubborn defenders of free speech, criticizing the government for trying to undermine the fundamental principles of the Danish democracy with a widening gap between words and actions, newspaper Politiken reported.

Flemming Rose also referred to the world-renowned Israeli writer Amos Oz and his essay "How to Cure a Fanatic." Amos Oz argued that Osama bin Laden's terrorist attack on the Twin Towers on September 11, 2001 in New York City may well be seen "as a declaration of love" to the Western world, as bin Laden supposedly was trying to make Westerners better people in accordance with his perverse ideals.

Well, at least Flemming Rose is being consistent, which is a rare thing nowadays.