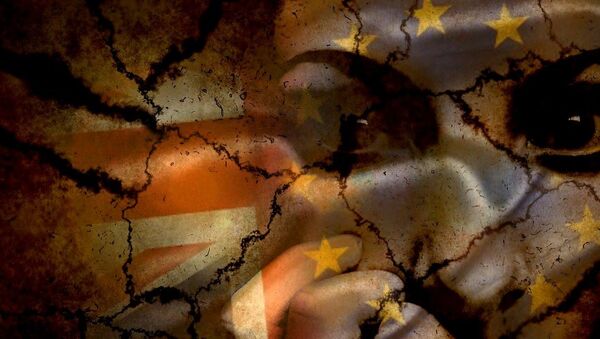 Brexit concerns have stirred a heated debate regarding the outlook on the UK's economy and growth should the nation leave the EU, and the only viable risk thus far is uncertainty, whilst many other parameters are impossible to foresee.

Kristian Rouz — Ahead of the Brexit referendum scheduled for 23 June, most economists tend to evaluate negative spillovers of the UK leaving the EU as exceeding potential gains. From financial sector professionals of Canary Wharf to international researchers affiliated with the World Trade Organization, a consensus opinion is that the UK's services sector, along with manufacturing, would face increased downward pressure in case of Brexit due to a restricted access to the common European market. Britain's energy and financial sectors would also suffer amidst the persistently low crude prices and an increased unpredictability of the broader situation, experts warn.

'Brexit' Risk Paralyzing Bank of England Decision-Making
However, the potential gains of Brexit to the UK's economy might be underestimated at this point, as greater fiscal independence might help Downing Street spur growth via fiscal stimulus, as evidenced by the recent example of Japan. An anticipated deep plunge of the sterling's FX rate would allow for a hike in the Bank of England's base interest rates without any further protractions.

According to a poll conducted by market research firm Ipsos-MORI on Sunday among over 600 of the City of London's financial sector professionals, 88% of the respondents expected greater negative consequences of a Brexit, exceeding potential gains in the near-term. The UK's growth outlook would be subject to a downgrade, most economists say, whilst household disposable incomes would also decline in case of a Brexit.

The poll provides a solid support to the viewpoint previously voiced by Prime Minister David Cameron and many other governmental officials and MPs, suggesting the UK should stay in the EU for the sake of its own economic well-being. Yet, Ipsos-MORI said, most economists surveyed on Sunday are members of the Royal Economic Society and the Society of Business Economists, which implies their tighter affiliation with the narrow interests falling in line with the current political agenda prevailing on Downing Street.

"Out" campaigners responded immediately having said that a consensus amongst mainstream economists only reflects the political agenda and broader consequences in a Brexit scenario are largely unpredictable, whilst the situation could hardly get worse anyway.

"There was a cosy consensus among economists supporting Britain scrapping the pound 15 years ago… They were wrong then and they are wrong now," Matthew Elliott, leader of Vote Leave said in a statement.

According to a separate report, representing the World Trade Organization's (WTO) perspective on the matter, the case of Brexit would pose several challenges before the British economy, making the overall situation more complex in the near-to-mid-term, yet, it would hardly bear any disastrous consequences.

"At the moment the banking system of Britain provides services all over Europe because by being part of the European Union they have what's called a single passport and they can operate everywhere." Peter Sutherland, head of WTO in 1993-1995, told BBC Radio 5 Live. "If Britain left the European Union it would not have a single passport and many financial services companies might say 'we can't have our headquarters in a country that is outside the European Union' and they might well move. This would be a huge blow to the British economy," Sutherland noted.

British economy is indeed heavily dependent on the financial services sector, yet, roughly 79% of the UK's GDP is driven by domestic consumption, meaning the overseas risks play only a secondary role in the Brexit case scenario. Most importantly, Brexit consequences should be evaluated from the British consumer viewpoint.

"There are countries from all over the globe who are not in the Single Market who export into the EU." Gerard Lyons of Economists for Brexit group said. "And the other 85% of the UK economy which is domestically focused won't need those rules and regulations."

The UK's exit from EU would mean an immediate devaluation of the sterling from the current $1.46 to $1.27-1.29 per pound, according to earlier estimates by Deutsche Bank. That would boost international competitiveness of British-made manufactured goods, however, potentially prohibitive tariffs imposed by the common currency bloc might prevent the UK's export expansion into the continent, thus indeed hindering the Albion's growth prospects. Yet, continental Europe is not the only market to the UK-produced manufactured goods.

Eurozone Economy Accelerates in Q1 Despite Tumbling Into Disinflation
On the other hand, imported goods would become more expensive in the UK, impairing consumption figures, and, therefore, indeed contributing to a slowdown in GDP dynamics in the near-term. However, the BOE would use the opened opportunity to hike rates, likely resulting in the pound's revaluation.

All in all, while the immediate consequences of a Brexit would be only minor to the UK, the fact of Britain leaving the EU would send shockwaves across international markets, pushing volatility an uncertainty higher on a global scale. This is the major risk the mainstream consensus is likely attempting to prevent. Meanwhile, the UK's self-sufficiency is subject to doubt as the nation is still running a massive current account deficit, chiefly attributed to food imports. Even if a Brexit provides new growth opportunities, the Cameron cabinet is lacking a sound fiscal stimulus program, and the entire Downing Street seems unprepared for the nation leaving the EU and finding itself in a new economic reality.