Relations With Russia May 'Spark Discord' Among G7 Members 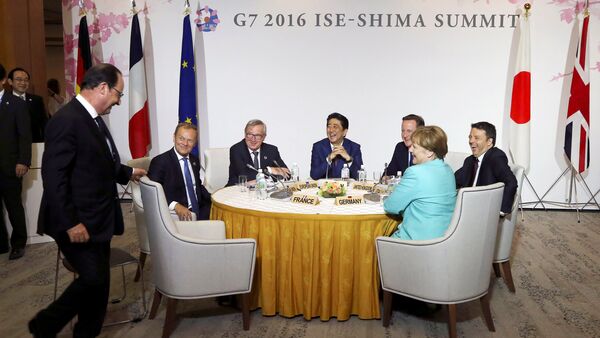 The recent G7 summit has left visible differences between its participants towards Russia, the Japanese daily newspaper Mainichi Shimbun reported.

G7 Agrees to Extend Sanctions Against Russia in June
While Japanese Prime Minister Shinzo Abe and French leader Francois Hollande called for rapprochement with Russia the US and Washington did not change their firm stance towards Moscow.

According to the article, relations with Russia could "spark discord" among the G7 country members.

The differences came due to the lack of progress in implementing the Minsk peace agreements on the Ukrainian crisis.

The Japanese government says that the "most important factor is Russia’s constructive position on the issue." Tokyo also underscores that cooperation with Moscow is possible, especially on Syria.

Earlier in May, Abe visited Russia's resort city of Sochi, held talks with Putin and presented the eight-point bilateral economic plan between the two countries, which covers such areas as oil and gas development and the modernization of ports and airports in the Far East.

G7 Stands Pat on Anti-Russian Sanctions
After the visit, Abe said that he "could feel a breakthrough" in Japan’s relations with Moscow.

Meanwhile, British Prime Minister David Cameron noted during a press-conference that the West should not forget that "Russia invaded Ukraine," according to the newspaper.

The G7 leaders have stressed that sanctions against Russia will remain in place until full implementation of the Minsk peace agreement on Ukraine, pointing out, however, that maintaining constant dialogue with Russia is crucial to the peaceful resolution of the crisis.

"We recognize the importance of maintaining dialogue with Russia in order to ensure it abides by the commitments it has made as well as international law and to reach a comprehensive, sustainable and peaceful solution to the crisis," they concluded.

In 2014, Russia's membership to the Group of Eight was suspended over Moscow's reunification with Crimea and the military conflict in Ukraine. Back then the original G7 members said they would not come to Russia's Black Sea resort city of Sochi for a G8 summit, which was scheduled for June 4-5, 2014. Instead, they met in Brussels without President Putin.