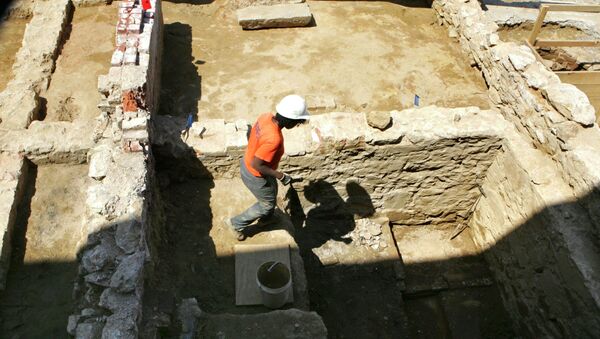 Russian archeologists have stumbled upon well-preserved millennium-old burial sites of ancient Caucasus tribes on the build site for the energy bridge to Crimea.

The burial site in Russia’s southern Krasnodar region dates back to 9th century A.D. and contains a trove of unique artefacts and weapons.

“This so-called bi-ritualistic burial site features cremated remains in urns and traditional cremations complete with arms, household items and ornaments. In all we have found 19 such burial sites and a large number of weapons and harnesses,” Irina Rukavishnikova, head of the excavation team, told RIA Novosti.

The Karl Marx burial mound so named after a nearby village, was discovered back in 2014. When it was announced that the energy bridge to Crimea would pass by, archeologists began digging. According to Rukavishnikova, the burials belong to a “no-name culture” with no mention in history.

Russian Archeologists Unearth 'White Walls' of Ancient Memphis
Scientists call them “the culture of cremation burials” the traces of which are widespread in the North Caucasus.

The biggest highlights of the archeological discovery were silver sheathes and a massive silver-plated harness featuring a pair of winged horses, an eagle clutching a goat and people performing a mystic ritual.

“What makes this harness so special is that it features unique silver plates with images of heraldic horses on them. You can find such images in the Alan culture, but this is different,” Rukavishnikova said.

The other finds included a metal chain and a pot meaning that this could be part of an ancient burial ritual when the deceased were laid to rest along with his or her household items. Some experts believe that the silver harness could have served as a a sign of distinction of a military commander his soldiers looked up to.

Irina Rukavishnikova believes that the silver items could have been sold by members of some other tribes, not necessarily local.

“A further study of images found on these items will tell us what the ancient people of the Caucasus believed in,” she added.

Earlier this month, a team of archeologists unearthed a hoard of silver coins at the construction site of a new highway which will lead the bridge across the Strait of Kerch separating mainland Russia from Crimea.

Archaeologists will continue working on a 50,000 square meter excavation site in the region, where they are studying the remains of a settlement dating back to the Roman Empire.

Scientists did not exclude that during the final stage of the excavations, they will be able to unearth unique artifacts from the Taman Bronze Age.