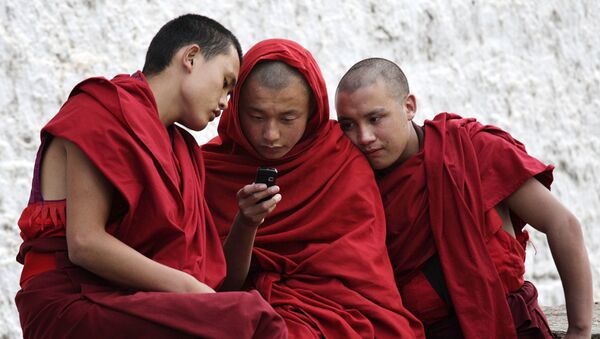 © AFP 2021 / Ed Jones
Subscribe
Former President of Russia’s Kalmykia Kirsan Ilyumzhinov is launching a new messenger which seeks to unite 500 million Buddhists all around the world.

In an interview with NSN, Ilyumzhinov recalled that the concept of a Buddhist messenger entered his mind while he was speaking at an international conference in Thailand’s capital Bangkok three years ago.

“When I saw one million fifty thousand people sitting in front of me in the lotus position, the idea flashed through my mind!”

The 14th Dalai Lama's opinion was taken into account during the creation of the application, according to Ulyumzhinov’s interview with NSN.

The Kirsan application, developed for App Store and Google Play, seeks to unite 500 million Buddhists all over the world, its website said.

“It is similar to other messengers: free, capable of sending video, mail, making phone calls. In addition to that it will disseminate preaches from Buddhist hierarchs, mantras. It will probably evolve into a social network,” Ilyumzhinov elaborated.

'Dharminator': Robotic Monk Teaches Buddhism in China
Initially, the messenger was due to be launched in May to coincide with Gautama Buddha’s birthday. But it was postponed to go online in July, confined to the 14th Dalai Lama’s 81st birthday on July 6.

Moscow, New Delhi, and Sri Lanka are among probable venues for the upcoming presentation.

Originally, the messenger was to be named "Buddha" or "Mantra" but the product engineers persuaded Ilyumzhinov, a candid and internationally known Buddhist, that his own name would serve as an appropriate brand for the application.

​Some $1 million was invested in the project.

There is one more peculiarity to be mentioned in light of Kirsan Ilyumzhinov’s passion for chess. The World Chess Federation (FIDE) chief intends to launch an online platform for playing the game which will subsequently merge with the Kirsan application.

“His Holiness Dalai Lama said that chess is a meditation. When a monk sits and meditates, he visualizes emptiness. A chess player doesn’t speak to anyone either [while playing]. He sits in a room, engrossed in silence.”

Russia is home to some one million followers of Buddha’s teachings. Buddhism is traditionally widespread in the country’s Republics of Buryatia, Kalmykia, and Tuva, as well as Southern Siberia.

#ExploreRussia together: Ivolginsky Datsan is the residence of the head of the Russian Buddhists #Buryatia pic.twitter.com/Dd1y5kNdoS