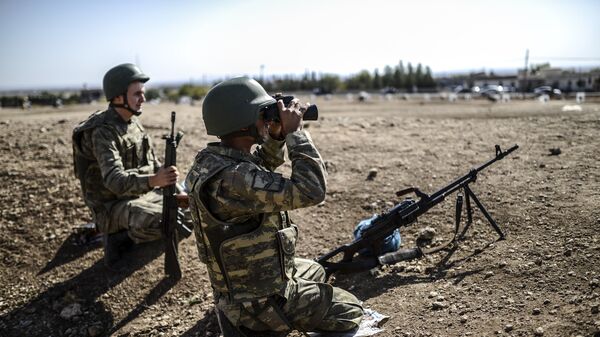 The Turkish General Staff claimed that during the operations conducted by the Turkish Air Force on April 15 and May 18-23 in the northern Iraqi district of Metina, 80 members of the PKK, including leaders were killed, while twelve militants were killed in the Turkey's district of Nusaybin.
PKK Bomb Blast Kills Four Soldiers in Southeast Turkey
MOSCOW (Sputnik) — A total of 92 militants of the Kurdistan Workers’ Party (PKK) were killed by the Turkish Armed Forces in a number of operations conducted in country's southeastern provinces, as well as in northern Iraqi regions during spring months, the Turkish General Staff said in a statement on Friday.

PKK Fighters Claim Killing 16 Turkish Servicemen Over 48 Hours
According to the statement, a total number of militants killed in the abovementioned Turkey's regions reached 881.

Tensions between Ankara and the Kurds escalated in July 2015 as fighting between the PKK, considered to be terrorist by Ankara, and the Turkish army resumed. Ankara has imposed several round-the-clock curfews in Kurdish-populated towns, preventing civilians from fleeing the regions where the military operations are taking place.