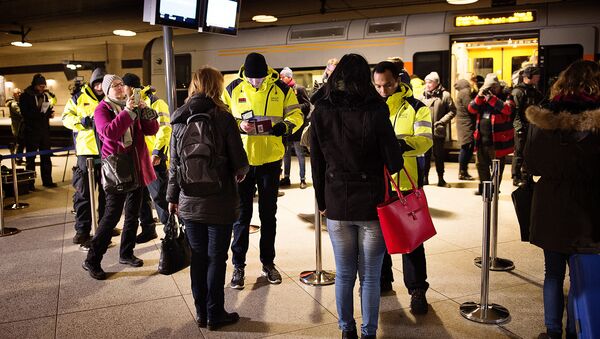 © AFP 2021 / Nils Meilvang / Scanpix
Subscribe
Having a large family with lots of close relatives is tough enough in times of peace, but it's even worse when you are a refugee on the run. 47-year-old Syrian Daham al-Hasan hopes to head to Sweden with his three wives and 20 children, but is stuck in Denmark due to Sweden's increasingly strict border controls.

Rich on the Run: Swedish Hunt for Tax Evaders in Denmark Yields Millions
So far, Daham al-Hasan has managed to bring one of his wives and eight children to Denmark. Two more wives and twelve children have been left behind in the Middle East, with Al Hasan now desperate to arrange for unification with the rest of his family. This is easier said than done, as Denmark has implemented rather tough migrant regulations.

"I would like to go to Sweden, but have been held behind in Denmark. In Sweden, I would have reunited with my family and children within three months," the 47-year-old father of 20 children told the Danish tabloid newspaper Extra Bladet.

The Kingdom of Sweden is a much more desirable destination for would-be welfare recipients. In Denmark, having 20 children entitles a family to 214,128 kroner (roughly 30,000 dollars) each year, Extra Bladet pointed out. If al-Hasan manages to bring his large family over the Øresund Strait to Sweden, he could bag up to 500,000 krona (roughly 60,000 dollars) in government money annually.

Counting the Pennies: Sweden Gets Its First Financial Study on Refugees
This is due to Sweden's system of additional child allowances from the fifth child onward. In Denmark, the child allowance tapers off as children get older. On this basis, it is perhaps not surprising at all that al-Hasan hopes to head further north. Total fertility rates are low in both Sweden (1.91 births per woman) and Denmark (1.73), but ethnic Swedes and Danes tend to have fewer offspring than immigrant families.

After Daham al-Hasans story made headlines in Denmark, a fierce debate broke out on whether or not the fertile Syrian man should be entitled to child benefits for all the children he had fathered. Remarkably, Daham al-Hasan promised to return to Syria as soon as the war there is over.

In November, Stockholm introduced temporary border controls within the Schengen visa-free travel zone in an attempt to curb immigration into the country amid the storming refugee crisis. The border controls have been since repeatedly prolonged by the government.

000000
Popular comments
The EU Socialists will be cheering him on while the right establishment will see his 20 kids as cheap labour. It's ordinary Danes who must both subsidise this welfare largesse and live with the devastating social and security implications.