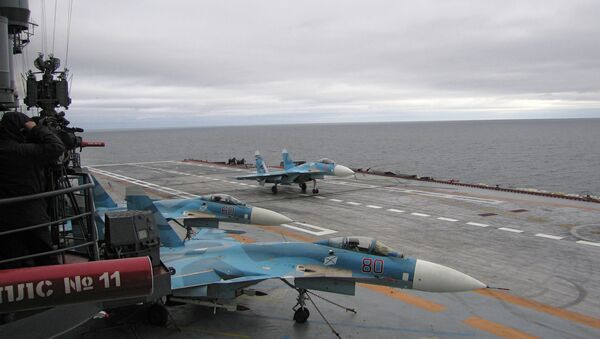 Commenting on the changing global geopolitical balance, respected Russian defense analyst Konstantin Sivkov discusses the kinds of new aircraft carriers Russia must develop in order to be able to defend its interests worldwide.

Russian Defense Ministry May Order New Aircraft Carrier in 2025
Last week, the Russian Ministry of Defense said that it might sign a contract on the construction of a new aircraft carrier; designed by the Krylov State Research Center, the construction of the ship would begin in the mid-2020s.

In his analysis, published in the independent online newspaper Svobodnaya Pressa, Sivkov recalled that in the history of contemporary Russian naval doctrine, "the question of whether the Navy needs the aircraft carrier has existed throughout the entire existence of this class of ships, but no conclusive, unequivocal opinion has ever been given."

What is Russia's naval doctrine? "Without going into detail, all tasks of the Russian Navy can be reduced to two goals: to support Russian diplomacy, and to defend our national interests by military means, both in peacetime to prevent aggression, and in wartime."

In the contemporary world, Sivkov wrote, "the geography of Russia's interests, especially its economic interests, is very broad and stretches across most of the world's oceans. This includes the development of economic relations within the BRICS framework, fishing (including in remote areas away from our coasts), mining and energy extraction from the floor of the seas and the oceans, cargo transportation, and much more."

Russia to Build New Amphibious Assault Ship to Replace Mistral
"In wartime," the doctor of military sciences added, "one of the most important tasks of the Russian Navy will be to defeat the carrier and missile-launching battle groups of the potential enemy. The areas where combat would take place in such situations would likely be sea and ocean areas 400-600 km from the Russian coast. From this distance the enemy would move to strike at targets on the mainland, at our ships at sea and their bases."

"Therefore, the tasks which the battlegroups of the Russian Navy must resolve, in both peacetime and in wartime, go far beyond the reach of our shore-based fighter jets and bombers. An analysis of the Navy's tasks and the conditions for their implementation indicates that it will not be able to effectively solve the problems assigned to it in distant sea and ocean areas if its groupings do not include at least one carrier."

Sivkov indicated that "among the main tasks requiring the use of Russian aircraft carriers is, first of all, participation in peacekeeping operations, the protection of Russian citizens in war zones and their evacuation, as well as the provision of assistance in areas of man-made and natural disasters."

In this context, he added, "the naval groups allocated for these tasks must be able to repel both limited surprise attacks of small groups and individual boats or small warships and submarines, and also combat aircraft and missiles. It may also be necessary to defend various [civilian] ships, to protect Russian and foreign civilian aircraft and various land-based objects, and to ensure the security of Russian citizens from hostile military units (including irregular units) during their evacuation."

China's Bases: Why Beijing is Bolstering Its Military Presence Overseas
"Without the participation of naval aviation, these tasks, especially those associated with countering enemy aircraft and ground formations deep inside enemy territory, cannot be addressed," the analyst noted. Specifically, such tasks will "require patrols by pairs or squads of fighter aircraft, along with one or two AWACS aircraft."

Hence, Sivkov calculated, "depending on the the remoteness of the patrol area, it may be necessary to have a permanent rotation of between 12-15 to 24-30 fighter aircraft, along with between four to eight AWACs aircraft." 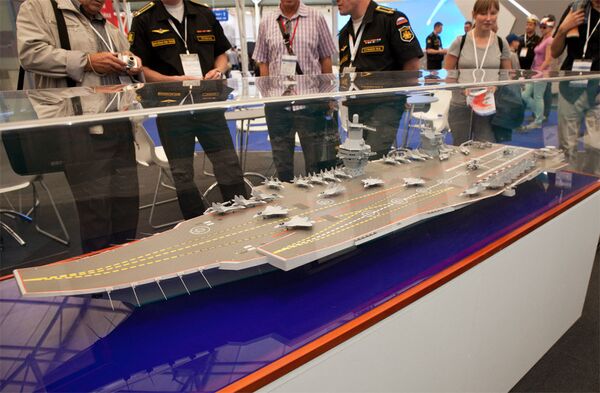 "In particularly adverse conditions the possibility of attacks by major aviation groups against formations of [Russian or Russian-allied] surface ships, important ground-based objects or large population centers cannot be excluded. Such groups could reach up to 30 individual aircraft. Rebuffing such a force would require 12 to 18 fighter aircraft, plus an additional AWACS aircraft."

At the same time, Sivkov indicated that in a battle under the oceans, "control of an area's underwater environment, the timely detection of enemy submarines and their destruction using short-range missiles and torpedoes would require the deployment of a minimum of between two and four [ASW] helicopters. Ensuring this would require at least 12 helicopters in the carrier's air group in total."

Good Morning Vietnam! Why the Russian Navy is Returning to Cam Ranh Bay
As far as dealing with the threat of ground-based terrorist and irregular units is concerned, "sudden shock attacks can be parried only by the timely response of aviation groups flying combat air patrol missions. Attacks by small groups of missile boats can be countered in similar fashion." Effective defense would require the patrol of at least one aviation battle group, consisting of two to four planes [at any one time]. And for this it will be necessary to have from 12-15 to 24-30 aircraft in the air group in total."

"In the absence of such cover capabilities, solving these tasks would require more diplomatic efforts, and would be accompanied by substantial material and political losses, and possibly even great loss of life," Sivkov warned. In the worst case scenario, "it might be impossible altogether," he added.

"Therefore, assuring the implementation of Russian foreign policy in peacetime requires a fairly powerful aircraft carrier. And the carrier is even more important when it comes to conducting military operations at sea; after all, it is common knowledge that superiority at sea is impossible without air superiority."

"At present," the analyst recalled, "naval confrontation between groups is carried out almost exclusively using air power. Attacks by anti-ship missiles and strike aircraft are repelled using fighter aircraft and ship-based anti-aircraft weapons. If small naval groups and individual surface ships are attacked by between two to four aircraft or cruise missiles, large groups may be struck by 30-40 or more anti-ship missiles launched from missile destroyers and submarines, or 40-50 carrier-based tactical aircraft."

"Repelling such attacks using only a ship's air defenses is virtually impossible, no matter how powerful those defenses may be, especially if the air attack is conducted simultaneously, is supported by electronic warfare aircraft, and the strike is preceded by an anti-ship rocket attack on air defenses."

In this situation, Sivkov wrote, "fighter aircraft not only destroy enemy aircraft, but also disorganize attacks: the timeframe of the attack is stretched, and the means of attack arrive in relatively small groups which ships' air defenses can successfully destroy." Moreover, "the enemy's target distribution is disrupted, and attempts to cover up the means of air assault through electronic jamming and anti-radar missiles are frustrated."

Idea That US's New Destroyer is 'Invisible' is a 'Fairy Tale for Fools'
"It is the disorganization of groups of attacking aircraft which is the main contribution of fighter aircraft in the defense of naval forces from attack by enemy tactical and carrier-based aircraft," Sivkov emphasized.

Therefore, "in order to repulse major groups of tactical or carrier-based aviation, it's necessary to allocate between 22 and 32 fighters, the majority of them operating airfield alert missions from the carrier deck, and assisted by accompanying AWACS aircraft. Outside areas 100-150 miles from the coasts this [type of ship defense] is only possible by carriers."

Switching to offensive operations, the military analyst noted that "the use of naval aviation for attacks on large groups of enemy surface ships has a number of advantages over cruise missiles." These, he noted, include higher reliability of target detection and destruction, with fighters supported by AWACS, reconnaissance, and electronic warfare aircraft having a higher chance of defeating enemy air defenses.

"Therefore, aircraft carriers for the Russian Navy are not simply a folly of our sailors, but an urgent necessity," Sivkov noted. "At the same time, the analysis above indicates that the air group aboard Russian aircraft carriers must be fairly large." 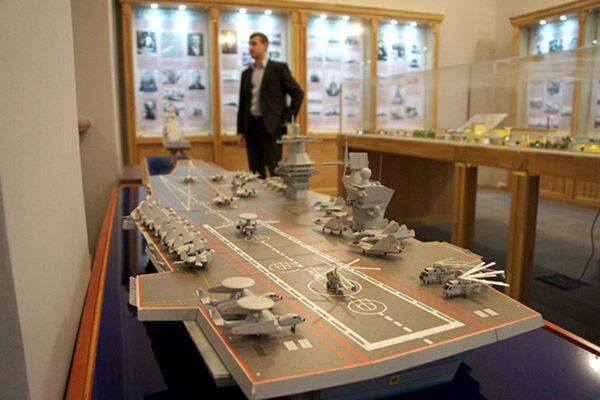 "In order to be able to handle the full spectrum of tasks which may be assigned to it, it is necessary for the carrier to have at least 40-60 aircraft, capable of targeting naval and ground-based targets, and to defend against enemy aircraft and cruise missiles. In addition, the air group must contain four-eight AWACS aircraft, two-four electronic warfare aircraft, two-four reconnaissance aircraft, and a minimum of 12 anti-ship and two search and rescue helicopters. In total this is between 70-90 aircraft."

With 4,000 US Cruise Missiles Pointed at Russia, How Will Moscow Respond?
"Therefore, the carrier itself must be large, with a total displacement of 75-85 tons, and possibly nuclear powered. Its air defenses must be capable of repelling both small groups (up to four units) of attacking air units in conditions of electronic interference. To this end, air defenses must include at least eight short-range air defense systems, as well as two to four units of small-caliber anti-aircraft artillery. Additionally, the ship must have means of anti-torpedo and anti-electronic warfare protection, capable of suppressing the homing capabilities of anti-ship missiles."

In the final analysis, the military analyst calculated that "each of Russia's two ocean-going fleets must have at least two carriers. Taking account of planned repairs and other measures to maintain the ships' combat readiness, this will allow Russia to have at least one combat-ready aircraft carrier in each oceanic theater of operations at any one time."