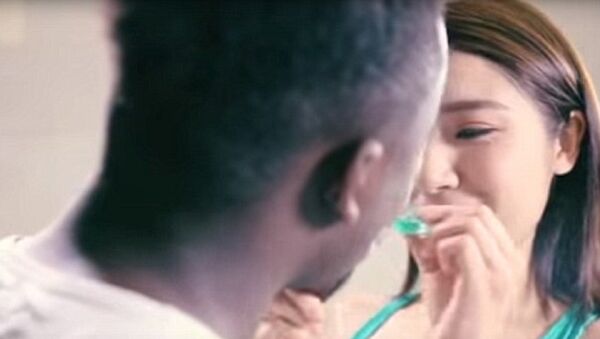 Racism or Historical Realism? Slave Toy Sends Shockwaves Through US
The commercial, by the Chinese Qiaobi company, features a young black man with white paint smeared on his face flirting with a young Chinese woman. The woman appears to be responsive to his advance, until the moment when they look about to kiss.

But instead of a smooch, the diminutive woman is somehow able to stuff a detergent pod into the much larger man’s mouth, before shoving him into a conveniently-located washing machine. She then hops up to sit on top of the working appliance while screaming and bumping is heard from inside.

When the cycle stops, she hops off, opens the lid, and a handsome pale-skinned Asian man rises, clearly surprising and intriguing the young woman.

The commercial was greeted with a shrug in China, but sent shockwaves across the Internet.

Interestingly, the ad is an obvious rip-off of an Italian laundry detergent ad, though with the opposite punchline.

In a commercial for Coloreria Italiana — a detergent with dye for dark loads, a thin white man is thrown into the washing machine in a similar scenario and emerges as a muscular black man. The slogan “Coloured is better,” then appears across the screen as the man flexes his muscles to the sound of rap music.

In a statement to Campaign Asia-Pacific, a senior official from Qiaobi stated that the company used “a little artistic exaggeration” for “comic effect” and, in a clear case of missing the racism, that they had “no intention to stir up emotions or show disrespect to other nationalities.” The official also claimed that they were unaware of the Italian commercial until after they had finished producing theirs.