Hugs, But Not Apologies: What Was the Point of Obama’s Hiroshima Visit? 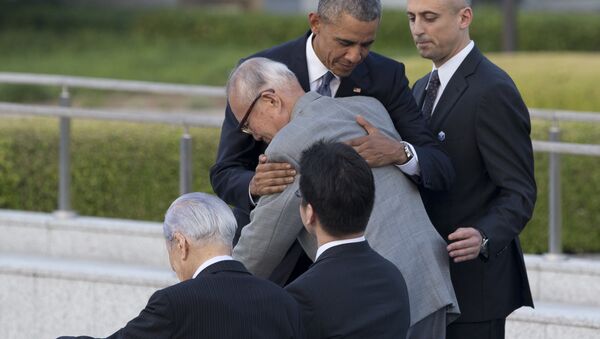 © AP Photo / Carolyn Kaster
Subscribe
On Friday, US President Barack Obama will be the first sitting commander-in-chief to visit Hiroshima after the US dropped an atomic bomb on the city August 6, 1945.

Radio Sputnik’s Loud & Clear spoke with Ward Wilson, Senior Fellow and director of the Rethinking Nuclear Weapons Project at the British American Security Information Council, and Charles Pellegrino, author of the book To Hell and Back: The Last Train From Hiroshima, about the significance of Obama’s visit and the lasting legacy of nuclear weapons.

Ahead of Obama’s Visit, Some Hiroshima Survivors Do Want an Apology

Wilson suggested that there have rightfully been questions about whether America should apologize for detonating an atomic bomb over a civilian area, killing some 140,000 people, but feels that it’s more useful to consider the future of warfare.

Wilson believes that the mystique surrounding nuclear weapons and the narrative portraying the bombing as the decisive end to World War II is a misinterpretation, and that other mitigating factors in Japan’s surrender often get overlooked.

Obama Will Not Apologize for Nuking Hiroshima During Historic Visit

"What made nuclear weapons seem so different is that Japan surrendered so suddenly after these two cities were bombed, and people got the feeling that nuclear weapons were these amazing powerful weapons." Wilson said, "but historical research shows that the Japanese surrendered because the Soviets declared war the night before we bombed Nagasaki. And that’s really why they surrendered, because a great power came into the war."

Host Brian Becker asked Pellegrino whether it was necessary for the US to bomb Japan, given that the nation seemed already poised to do so.

"Sixty cities had already been firebombed, including a large part of Tokyo, and in fact the bombing of Hiroshima and Nagasaki did not immediately end the war," Pellegrino responded.  "After August ninth, when we bombed Nagasaki, we dropped warnings that more would be coming… and it was August fourteenth that we sent in 3,000 planes and firebombed almost everything else."

Becker asked Wilson and Pellegrino about Obama’s earlier campaign to end the development of nuclear weapons, which appears to have translated over two terms into a modernization of those same weapons.

"It’s very frightening to see the trend, both in Russia and the United States, of going back to thinking in terms of battlefield nuclear weapons, low yield hydrogen bombs that are actually neutron bombs, a radiological weapon," Pellegrino said.

Wilson noted that America has spent about a trillion dollars on weaponry that is, in the final analysis, more risk than reward. "The problem with nuclear weapons," he asserts, "is you can’t really make them useable because they always leave radiation wherever you use them, and that poison will persist for weeks, months, even hundreds of years."

Wilson suggests that the first step toward ending the psychological dependency of nations on nuclear weapons is to place in proper context what made those weapons popular.

"I think that part of problems is we saw them supposedly win at Hiroshima and we fell in love with them.” Wilson stated, “If nuclear weapons were a religion, Hiroshima would be the first miracle."

000000
Popular comments
what was the point? To remind the world tha USA can get away with targetting civilians and using nukes!
gris.ours
28 May 2016, 02:42 GMT
000000
Not apologizing means USA intends to use nuclear again. Use of nuclear weapons as first strike is in US military doctrines. It's plain and simple to see their evil intentions. Hiroshima and Nagasaki are only the beginning of their nuclear experiments on humans. They plan more.
copius
29 May 2016, 17:35 GMT
000000
Newsfeed
0
New firstOld first
loader
LIVE
Заголовок открываемого материала
Access to the chat has been blocked for violating the rules . You will be able to participate again through:∞. If you do not agree with the blocking, please use the feedback form
The discussion is closed. You can participate in the discussion within 24 hours after the publication of the article.
To participate in the discussion
log in or register
loader
Chats
Заголовок открываемого материала
Worldwide
InternationalEnglishEnglishMundoEspañolSpanish
Europe
DeutschlandDeutschGermanFranceFrançaisFrenchΕλλάδαΕλληνικάGreekItaliaItalianoItalianČeská republikaČeštinaCzechPolskaPolskiPolishСрбиjаСрпскиSerbianLatvijaLatviešuLatvianLietuvaLietuviųLithuanianMoldovaMoldoveneascăMoldavianБеларусьБеларускiBelarusian
Transcaucasia
ԱրմենիաՀայերենArmenianАҧсныАҧсышәалаAbkhazХуссар ИрыстонИронауОssetianსაქართველოქართულიGeorgianAzərbaycanАzərbaycancaAzerbaijani
Middle East
Sputnik عربيArabicArabicTürkiyeTürkçeTurkishSputnik ایرانPersianPersianSputnik افغانستانDariDari
Central Asia
ҚазақстанҚазақ тіліKazakhКыргызстанКыргызчаKyrgyzOʻzbekistonЎзбекчаUzbekТоҷикистонТоҷикӣTajik
East & Southeast Asia
Việt NamTiếng ViệtVietnamese日本日本語Japanese中国中文Chinese
South America
BrasilPortuguêsPortuguese
NewsfeedBreaking
09:25 GMT'He Probably Won't Play': Djokovic's Dad Accuses Australian Open of 'Blackmail' Over Vaccine Mandate
09:02 GMT'Chinese Babydoll Army': Indian Netizens Mock Clip of PLA Troops Dancing in Snowy Mountains
08:47 GMTGeorgian Police Use Pepper Spray Against Saakashvili Supporters Near Court
08:36 GMTPrince Charles Lawyers Up Over Speculation He Was 'Racist' Royal Who Asked About Archie's Skin Tone
08:18 GMTAs Iran Nuclear Talks Resume, Will Israel Ever Exercise Military Option?
08:04 GMTOmicron Variant: Panic Grips Indian Officials as Passenger From South Africa Tests COVID-Positive
08:01 GMT'Omnibus of Omnishambles': Boris Johnson Facing SNP Motion of Censure in Parliament
07:41 GMTKeane & Carragher Engage in War of Words Over Cristiano Ronaldo's Place in Man Utd's Starting XI
07:40 GMTNetizens Split as Indian Comedian Munawar Faruqui Hints at Quitting Stand-up
07:13 GMTFiji Dispatches Troops to Honiara as Solomon Islands Announces State of Public Emergency Until March
07:04 GMTRosneft CEO: Russia-China Trade Turnover Creates Great Potential for Payments in Yuan and Rubles
06:52 GMTTrump Wanted to Keep Bagram Base Under US Control After Afghan Withdrawal 'Because of China'
06:51 GMTSocialist Xiomara Castro Leads in Honduran Presidential Race
06:36 GMTThird of Swedish Police in Blighted Areas Have Mental Issues – Survey
06:27 GMTFormer US Defence Chief Mark Esper Sues Pentagon for 'Blocking' Parts of His Memoir
06:09 GMTPriti Patel to Hold Talks on Migration Crisis With European Ministers Despite French Snub
06:00 GMTKnow-How: Who Actually Made Scythian 'Gold'
05:59 GMTDenmark Bans Influencers From Advertising Cosmetic Surgery, Sugar Dating to Minors
05:51 GMTUK Convenes Urgent G7 Ministerial Meeting Over COVID Variant Omicron as WHO Urges Not to Panic
05:07 GMTMass Killer Breivik Sending Letters to Survivors With Excerpts From His Manifesto