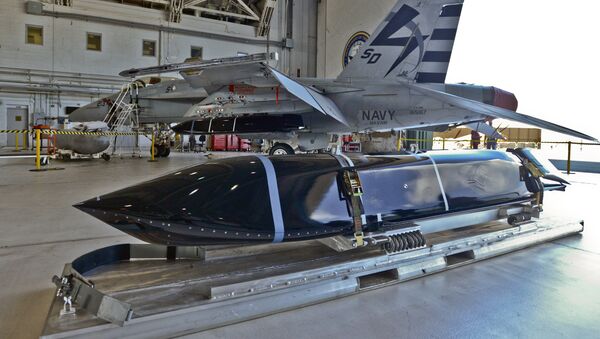 © Wikipedia / U.S Navy
Subscribe
According to the company statement, US defense corporation Lockheed Martin has received a $321.8 million contract to continue testing and integration of the US Navy’s Long Range Anti-Ship Missile.

Lockheed Named Top US Defense Contractor in 2015 With Deals Worth $36Bln
WASHINGTON (Sputnik) – US defense corporation Lockheed Martin has received a $321.8 million contract to continue testing and integration of the US Navy’s Long Range Anti-Ship Missile (LRASM), the company said in a statement on Thursday.

"The LRASM team has successfully met all requirements on an accelerated acquisition timeline in an effort to give our warfighters a much-needed robust, anti-ship capability," Lockheed Martin LRASM Program Director Mike Fleming stated. "LRASM will give warfighters the ability to engage in previously denied battle environments."

The anti-ship cruise missile is armed with a "proven 1,000-pound penetrator and blast-fragmentation warhead," along with a weapon data link and enhanced Global Positioning System to destroy specific targets within groups of ships, according to Lockheed Martin.

The LRASM will be integrated into the US Air Force B-1B strategic bomber jet and the US Navy F/A-18-E/F strike fighter aircraft, Lockheed noted.

The US Naval Institute has previously stated that the US Navy initiated the LRASM program in reaction to China’s rapid military modernization program.

The LRASM is expected to be operational as early as 2018 for the US Air Force and for the US Navy in the following year.