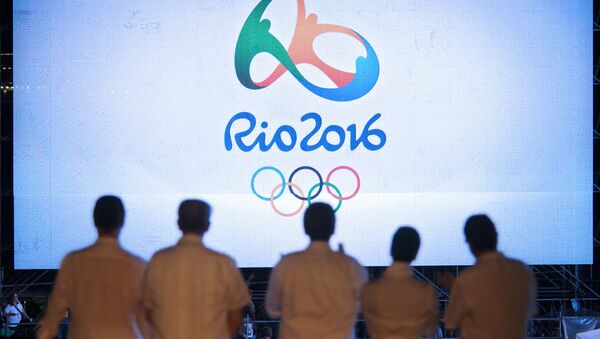 © AFP 2021 / J. P. Engelbrecht
Subscribe
Russian athletes should be banned from in the upcoming 2016 Summer Olympic Games in Rio de Janeiro in case WADA confirms allegations of the doping usage among Russian sportsmen.

MOSCOW (Sputnik) — Russian athletes should be banned from taking part in the upcoming Summer Olympic Games in Rio de Janeiro in case the World Anti-Doping Agency (WADA) confirms allegations of the widespread use of doping in Russian sport, US Anti-Doping Agency (USADA) head Travis Tygart said.

Russia Confirms Willingness to Cooperate with IOC, WADA to Fight Doping
US media reported this month, citing former director of the Russia-based anti-doping laboratory Grigory Rodchenkov, that dozens of Russian athletes at the 2014 Winter Olympics in Sochi, including at least 15 medal winners, were doping throughout the Games as part of a "state-run program." WADA has launched a probe into the claims. Richard McLaren, who has already investigated reports of Russian athletes using doping, will lead the new probe.

"If WADA verifies such obstruction in the lead-up to Rio, then the entire Russian delegation should be barred not only from the 2016 Olympic Games but from international competition indefinitely — until full cooperation with the McLaren commission is assured, robust testing is in place and clear sanctions are established. Russia cannot expect to compete if it refuses to provide antidoping officials full access to its athletes," Tygart said in an article published on Wednesday by The New York Times.

Russia to Assist WADA in Doping Probe - Putin
The USADA head also called for wider investigative powers to be given to McLaren, stressing that WADA should interview whistleblowers such as Rodchenkov, as well as coaches, doctors, athletes and anti-doping laboratory staff.

"Since these [doping] findings, the position of my organization, the United States Anti-Doping Agency, which is a signatory to the World Anti-Doping Code, has not wavered: To protect clean athletes, the Russian track and field federation must not be allowed to participate in the Rio Olympics," he said.

In November 2015, WADA's Independent Commission issued a report accusing Russia of numerous breaches of global anti-doping regulations and recommended the country be banned from international athletics competitions. As a result, the International Association of Athletics Federations (IAAF) temporarily suspended the Russian Athletic Federation's membership of the association. The Russian authorities have promised to carry out a clean-up program to fulfill the WADA demands in order for the country's athletes to be allowed to participate in the 2016 Olympics.