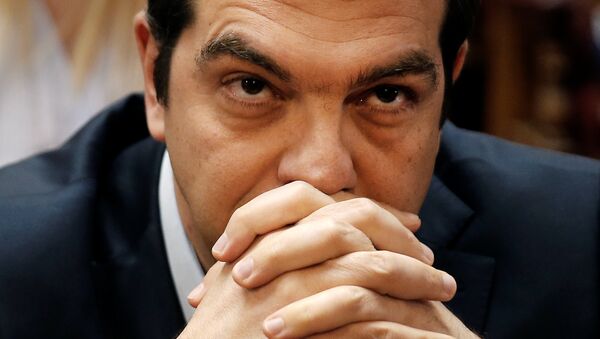 © REUTERS / Alkis Konstantinidis
Subscribe
International
India
Africa
Greece has unlocked another bailout deal from its creditors, the Troika following 11 hours of negotiations in Brussels. Athens will receive the money in two instalments, US$8.39 billion in June 2016 and US$3.1 billion three months later in September.

Eurogroup president, Jeroen Dijsselbloem said the agreement was a "major breakthrough" for the debt ridden country and that it signaled the beginning of a new phase in the Greek bailout deal.

On May 25 2016, the Eurogroup agreed to release the money on condition the government implemented "prior reforms" that had been agreed in 2010 which the Greek government and previous administrations had still failed to implement. This includes allowing the sale of all loans to private debt collection companies, selling off the old Hellenikon airport and reforming state social support.

In August 2015, Greece secured a third bailout since 2010 to the tune of US$96 billion — on condition Greece raised income tax for high earners and lowered tax-free thresholds and did away with benefits for poor pensioners — sound familiar?

In six years and three bailouts, tax reforms, privatization plans and the selling of Greek assets have been promised but failed to materialize. Often met with political resistance and violent protests from anti-austerity campaigners who are struggling to survive in a country where a quarter of the population are unemployed.

And never immune from being told by Brussels to pull its socks up, Greece has been reprimanded again by European politicians for not implementing reforms and tax laws to ensure the country can "stand on its own two feet."

Tsipras' Government is milking the cow, just like previous Greek governments have done. I don´t see any difference https://t.co/ob4hkh879E

Guy Verhofstadt, Belgium politician and leader of the Alliance of Liberals and Democrats for Europe (ALDE) has accused Greek Prime Minister Alexis Tsipras of "continuing the policies of his predecessors," which is to "produce law, but fail to implement them."

"They are milking the cow, just like previous governments have done. I don't see any difference," Verhofstadt said.

ALDE leader Guy Verhofstadt on #Greece: "Shocking that 74% of legislation ADOPTED since the 1st bailout package has never been IMPLEMENTED"

​The Greek government owes its creditors, the Troika, more than US$335 billion. With eye-watering debts like that, it's expected that Eurogroup financiers will be making sure Tsipras is not "milking the cow," but selling the family silver instead.