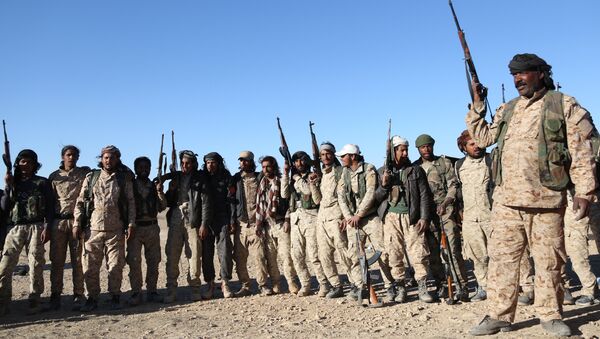 © AFP 2021 / DELIL SOULEIMAN
Subscribe
As the Syrian Democratic Forces (SDF), led by the Kurdish People's Protection Units (YPG), liberate a number of villages and settlements in the Raqqa neighborhood and take control of the strategically important settlement of Kirtaca, some suggest that the large-scale offensive might be a good chance for Russia-US cooperation in Syria.

Tackır Kobani, a representative of the SDF spoke to Sputnik Turkey about the large-scale three-pronged offensive, which was launched on Tuesday to liberate Syria’s third-largest city Raqqa, which has been the de facto ‘capital’ city of Daesh for over 2.5 years.

“Our forces continue to advance to the north of Raqqa under the aerial coverage of the US-led anti-terrorist coalition forces, which are conducting massive air strikes on Daesh positions in the region,” he said.

Kurds lead operation to retake Raqqa from IS https://t.co/OjI8ZpypfBhttps://t.co/TX6WHGodpm

​“A number of settlements and villages in the area have been liberated from the jihadists. We have also taken under control the large settlement of Kirtaca in the Raqqa neighborhood,” he added.

Tackır Kobani also said that the SDF, using heavy armaments, are currently encountering a fierce fighting with Daesh near the village of Tılsemer.

Fleeing from the villages the jihadists lay mines and set traps on the way of their retreat. However a large number of militants have been killed.

The civil population of the area is actively cooperating with the SDF in the operation, he added.

Russia prepared to coordinate w/ Raqqa offensive. Liberation could come earlier if US were more open to cooperation. pic.twitter.com/hPpHquin88

​Russian Foreign Minister Sergei Lavrov said on Tuesday that Russia is ready to coordinate efforts with US-led coalition and Kurdish forces in Syria on the liberation of Raqqa.

"Raqqa is one of the aims of the anti-terrorist coalition, just like Iraq’s Mosul. We are confident that these cities could have been liberated more effectively and faster if our military officials (of Russia and US) would have started coordinating their actions much earlier," the foreign minister noted.

On Friday, Russia proposed conducting joint airstrikes with the US-led coalition in Syria against an al-Qaeda-linked group al-Nusra Front and other factions, in an effort to seek more coordination with the West in the Syrian conflict.

Operation Raqqa: Full Scale Assault Begins to Liberate Daesh’s Capital City
The action would begin on May 25 and be coordinated with the Syrian government, Russian Defense Minister Sergei Shoigu told military and political leaders at a Defense Ministry meeting.

“We propose. . . a joint action between the Russian air force and the US-led coalition to plan and conduct strikes against the al-Nusra Front, which does not support the cease-fire, as well as against convoys of arms and fighters crossing the Syrian-Turkish border,” the Russian media quotes the Defense Minister as saying.

In reference to the above Sergei Lavrov commented:

"There is a chance now that such coordination will take place. We think that Russian Aerospace Defense Forces and the US-led coalition’s aviation should work synchronously, in coordination, and help those on the ground to really resist terrorist units. First of all, among them [forces on the ground] are, of course, armed forces of the Syrian Arab Republic, and, of course, different groups of Kurdish forces, including the armed part of the Democratic Union Party.”

Liberation of Raqqa Similar to ‘Capture of Berlin in WWII’
According to Russia’s online newspaper Gazeta.ru, the Kurdish Democratic Union Party has announced that it is going to coordinate its actions both with Russia and the US.

The outlet notes that the Democratic Union maintains close contacts with Russia. Its co-chairman Salih Muslim has come to Moscow twice to coordinate his party’s inclusion into the Syrian peace talks in Geneva.

000000
Popular comments
Seems like Russis likes to be slappe din the face by murica. Russia is a legal actor, by groveling to an illegal invading power, all they do is legitimize with no advantage for Russia or Syria. Disgusting and shameful.
papimalo
25 May 2016, 18:09 GMT
000000
Very hard for the US to bomb their ISIS creation ? Like killing your own kids for them.
megargy
25 May 2016, 18:17 GMT
000000
Newsfeed
0
New firstOld first
loader
LIVE
Заголовок открываемого материала
Access to the chat has been blocked for violating the rules . You will be able to participate again through:∞. If you do not agree with the blocking, please use the feedback form
The discussion is closed. You can participate in the discussion within 24 hours after the publication of the article.
To participate in the discussion
log in or register
loader
Chats
Заголовок открываемого материала
Worldwide
InternationalEnglishEnglishMundoEspañolSpanish
Europe
DeutschlandDeutschGermanFranceFrançaisFrenchΕλλάδαΕλληνικάGreekItaliaItalianoItalianČeská republikaČeštinaCzechPolskaPolskiPolishСрбиjаСрпскиSerbianLatvijaLatviešuLatvianLietuvaLietuviųLithuanianMoldovaMoldoveneascăMoldavianБеларусьБеларускiBelarusian
Transcaucasia
ԱրմենիաՀայերենArmenianАҧсныАҧсышәалаAbkhazХуссар ИрыстонИронауОssetianსაქართველოქართულიGeorgianAzərbaycanАzərbaycancaAzerbaijani
Middle East
Sputnik عربيArabicArabicTürkiyeTürkçeTurkishSputnik ایرانPersianPersianSputnik افغانستانDariDari
Central Asia
ҚазақстанҚазақ тіліKazakhКыргызстанКыргызчаKyrgyzOʻzbekistonЎзбекчаUzbekТоҷикистонТоҷикӣTajik
East & Southeast Asia
Việt NamTiếng ViệtVietnamese日本日本語Japanese俄罗斯卫星通讯社中文（简体）Chinese (simplified)俄罗斯卫星通讯社中文（繁体）Chinese (traditional)
South America
BrasilPortuguêsPortuguese
NewsfeedBreaking
11:15 GMTMassive Plume of Smoke Reportedly Spotted Rising From Major US Base in Iraq - Video
11:13 GMTFrance Hardens Visa Rules for Moroccans, Algerians, Tunisians
11:05 GMTMan Who Threw Egg at Macron Admitted to Psychiatric Hospital
10:44 GMTGeorgina Rodriguez Desperate to Be Cristiano Ronaldo's Wife, Waiting for Man Utd Star to Propose
10:27 GMTTrump Facing Possible Criminal Liability For ‘Sustained Assault’ on Georgia’s Electoral Vote Count
10:25 GMTMilley Preps for Congressional Grilling Over ‘Treasonous’ Phone Call to PLA Head Behind Trump’s Back
10:17 GMTMoscow Calls on NATO, EU to Urge Pristina to Withdraw Forces From Kosovo and Prevent Escalation
10:15 GMTEuropean Parliament President Says German Elections Testify to Stability of Europe
10:12 GMTKremlin Sees No Reason for Ukraine to Be Hysterical About Russian-Hungarian Gas Contract
10:01 GMTCampaign Ads Offering 'Russian Virgins & Cocaine' on a Menu Outrages Embassy in Spain
10:00 GMTUK's Labour Party Blames Government for Fuel Crisis
09:08 GMTFrench Sanofi Gives Up mRNA COVID-19 Vaccine Development Over Saturated Market
08:42 GMTUK to Start First Round of Talks on Joining Trans-Pacific Trade Bloc
08:40 GMTTwitter Frenzy as UEFA Scraps Decision to Fine European Clubs for Launching Super League
08:36 GMTHaiti Dismisses Highly-Criticized Electoral Council, Prime Minister’s Office Says
08:34 GMTBeijing on Exclusion From Dukovany NPP Project: We Hope Prague Will Respect Market Rules
08:30 GMTDemi Lovato Opens Up About 'Warm and Loving' UFO Interaction
08:27 GMTBudapest Summons Kiev's Ambassador to Discuss Reaction to Gas Deal With Russia, Reports Say
07:58 GMTYouTube Removes Content 'Casting Doubt Over Elections in US, Germany'
07:56 GMTPolice Chief in Utah Takes Leave of Absence Amid Gabby Petito 911 Call Handling Probe