Senator Wants Pentagon Funding to Depend on Releasing 9/11 ‘Truth’ 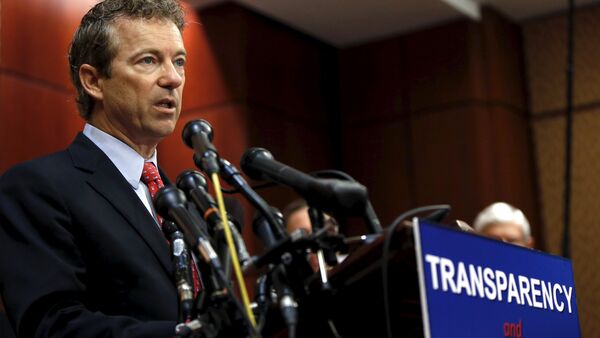 © REUTERS / Gary Cameron
Subscribe
Senator Rand Paul has filed an amendment to the US defense budget that will compel the Senate to declassify 28 classified pages of an investigation into the 9/11 terrorist attacks that was conducted in 2002.

The 28 classified pages, which Paul (R-KY) seeks to have released under the National Defense Authorization Act (NDAA), would make public information that may reveal collusion between the Saudi government and al-Qaeda.

"Information revealed over the years does raise questions about [Saudi Arabia’s] support, or whether their support might have been supportive to these al-Qaeda terrorists," Paul told journalists on Capitol Hill in June of last year.

"We can not let page after page of blanked-out documents be obscured behind a veil, leading these families to wonder if there is additional information surrounding these horrible acts," he stated.

Charles Schumer, Democratic Senator from New York, said of Paul’s amendment: "Look, if the Saudis did not participate in this terrorism, they have nothing to fear about going to court…If they did, they should be held accountable."

The proposed amendment comes on the heels of the Justice Against Sponsors of Terrorism Act, which prevent nations implicated in terrorist acts from using immunity to shield themselves from prosecution. It also enables victims’ families to sue the countries responsible for the terrorist acts that caused their relative’s injury or death. This bill, which passed unanimously in the Senate, has faced considerable pushback from the Obama Administration, including threatening a veto, citing concerns over the security of Americans living and working abroad, and feeling that the bill "will make the United States vulnerable in other court systems around the world," according to White House press secretary Josh Earnest.

Terry Strada, National Chair of 9/11 Families & Survivors United for Justice Against Terrorism, and widow of Tom Strada, who died in the north tower of the World Trade Center during the 2001 attacks, believes the classified pages will confirm what she and others suspect regarding Saudi Arabia’s involvement in the 9/11 attacks.

"Nearly every significant element that led to the attacks of September 11 points to Saudi Arabia," Strada said, adding that "Money is the lifeblood of terrorism. Without money, 9/11 wouldn’t have happened."

Former Florida Senator Bob Graham, who has been calling for the papers to be released for almost ten years, believes there is a "smoking gun" to be found within their pages. "I think the linkages are so multiple and strong and reinforcing that it’s hard to come away from reading all this material and not feel that there was a support network, and that support network came from Saudi Arabia," said Graham, who believes the classified documents are just the tip of the iceberg.

"They will also open the path to other materials. There are thousands of pages of documents, which speak to the relationship between Saudi Arabia and the 19 hijackers."

He asked, "Could those 19 people have carried out a plot as complex as 9/11 while maintaining anonymity in some cases for more than a year and a half while they were in the United States without having some support?"

Under Senator Paul’s amendment, the 28 pages would have to be made public 60 days after the passage of the NDAA.

000000
Popular comments
Oh they will release the 1000's of pages but it will be 98% redacted. As usual they will cite national security. I guess that is how crimminals lie now a days.