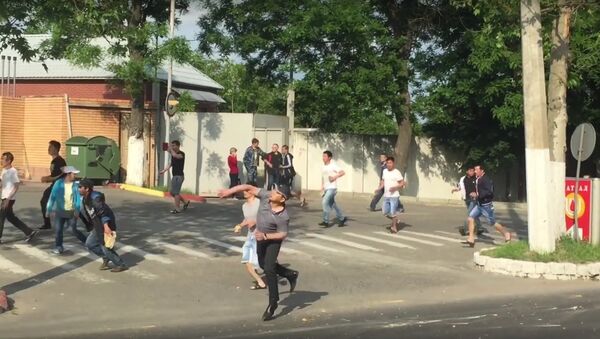 © Photo : YouTube/Ivan Vikhopen
Subscribe
International
India
Africa
Ukraine's coastal city of Odessa saw confrontations between the police and the Vietnamese community on Monday during the course of protests at the activities of self-described government employees, who broke into property and looted their belongings.

May 2 in Odessa: The Massacre Which Sparked Wider Civil War in East Ukraine
The Vietnamese community in Odessa has reported a violent attack by a large group of armed men in masks, purporting to be members of Ukraine's security services, who broke into and looted their property.

The attack took place at around 3pm on Monday in the city's Vietnamese quarter, where the community has lived for more than four decades.

The city of Odessa has a strong connection with Vietnam; one of its streets is named after former Vietnamese President Ton Duc Thang, and during the Soviet Union ships of aid set off from its port to help the Vietnamese in wartime.

However, that shared history has been marred by fear and persecution since the Maidan coup that ousted Ukraine's elected government in 2014, fuelled by violent right-wing extremists who gathered in Kiev. Vietnamese in Odessa have published photographs which appear to show the so-called Ukrainian security forces breaking into an apartment and stealing valuables; they report that cash, jewelry, computers, televisions and even expensive wines were stolen from several apartments.

A video of the "police raid."

In retaliation, the Vietnamese have used their cars to block streets, throwing stones at police vehicles on their way to police headquarters, demanding an explanation of the violent robbery.

Nam Dang, one of the witnesses of the attack, told Sputnik that the raid was unfortunately not the first attempt at persecution suffered by the Vietnamese community.

"Armed people dressed in black, calling themselves members of the security services, then the police, then tax inspectors, broke into the housing complex, breaking the doors, and took money and valuables."

"They were more like robbers than law enforcement officials. They didn’t show any documents, or any protocol to do with the raid," he said.

"This is not the first time something like this has happened. The worst attack was during the Tet (Vietnamese New Year) celebrations last year. There was no active response from the authorities."

Dang explained that this time, representatives from the Vietnamese Embassy are working with the local authorities to make sure the perpetrators are brought to justice; the Vietnamese government has also summoned the Ukrainian ambassador over the incident, Thanh Nien News reported on Wednesday.

"We, the victims, gathered outside the police headquarters. Yesterday we went to the regional and city administration, who promised to investigate," he said.

‘They Are Stopping Fascists’: UNAC Representative on Odessa Memorial
Salomeya Bobrovskaya, deputy governor of the Odessa region, spoke with protestors and promised an investigation and greater security for the Vietnamese community.

"We are increasing security and taking statements. I think as soon as possible my boss (Mikheil Saakashvili) will ask the police chief to find out who they were: Kiev, Odessa or Mafia, I think the best thing to do is increase security," she reportedly told the protestors.

Nam Dang said that he and other Vietnamese are skeptical that the government's investigation will lead to justice.

"There are no results. We have gathered outside the police headquarters and we are waiting for somebody to come up with an explanation. When that will happen – nobody knows. And the area's security has not been increased."