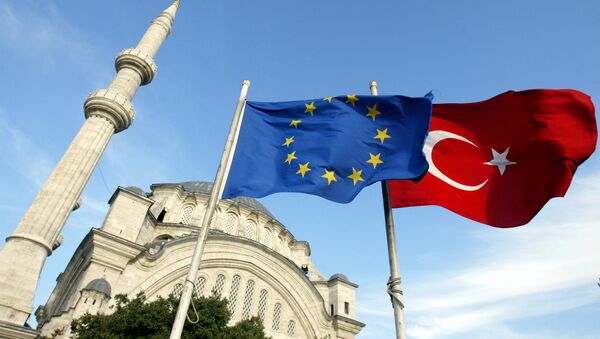 © AP Photo / Osman Orsal, File
Subscribe
According to a chairman of the German right-wing party Alternative for Germany, Berlin should have refrained from supporting the agreement on migration concluded between Ankara and Brussels.

EU-Turkey Migration Deal Not Failure - German Chancellor
MOSCOW (Sputnik) – Berlin should have refrained from supporting the agreement on migration concluded between Ankara and Brussels, as it turned out to be a failure, a chairman of the German right-wing party Alternative for Germany (AfD) told Sputnik.

"The migration deal between the EU and Turkey failed. Germany should have never supported it. It was a big mistake," Georg Pazderski said.

"She should skip the deal and secure the German borders, to prevent further mass immigration to Germany," the chairman added.

In March, Brussels and Ankara agreed on a deal under which Turkey pledged to take back all undocumented migrants who arrive in the European Union through its territory in exchange for Syrian refugees accommodated in Turkey. In return, the bloc pledged to accelerate the Turkish EU accession bid and introduce a visa-free regime.

Turkey is yet to meet five out of the 72 total requirements, notably those related to data protection and anti-terrorism laws, among other issues.

On Tuesday, Erdogan said Turkey might suspend the migration deal, if the bloc fails to proceed with the visa-free regime. On Wednesday, Merkel responded by saying that the European Union will resolve the situation if the visa process for Turkey took more time than expected.

000000
Popular comments
JOHN CHUCKMAN, I don't believe Obama will allow it and NATO has both instigated and supported the migrant crisis. We in Europe need the support of a new presidency and a new administration so that we can end this human catastrophe and normalize relations with Russia. And I believe both of those things are in the interests of the American people, too.