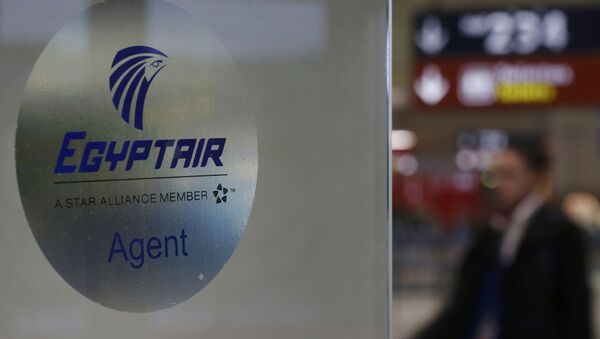 © REUTERS / Christian Hartmann
Subscribe
As investigators seek answers to the EgyptAir plane crash over the Mediterranean, blood samples have been taken from relatives to help a forensics team identify victims.

The search for remains of Egyptair Airbus 320, after it mysteriously disappeared over the Mediterranean, continues. The black boxes of Flight MS804 have not been located, and field teams are continuing the search.

According to EgyptAir Holding Company chairman Safwat Musallam, plane crash victims arrived to the morgue in Cairo yesterday. Relatives of victims of the crash gathered in Cairo and, to help victim identification, DNA samples were taken.

According to a spokesman for the French Navy, providing specialized equipment and a patrol boat to aid in the search, they are attempting to locate as much debris and remains as possible.

A French naval craft is provide hydrophones, specialized microphones to seek the pings emitted by the flight recorders. According to a spokesperson in Paris, it will be "several more days" after the equipment arrives to the site before the flight recorders are located and retrieved.

No extremist group has taken responsibility for the crash and, until the flight recorders are studied, the cause of the tragedy remains unknown.

000000
Popular comments
You would think with today's technologies nothing can be unaccounted for. They should able to tell what happened to the aircraft within minutes. There are no uncompromised bodies left in the world to investigate these things without interference.
beydety
25 May 2016, 05:36 GMT
000000
Newsfeed
0
New firstOld first
loader
LIVE
Заголовок открываемого материала
Access to the chat has been blocked for violating the rules . You will be able to participate again through:∞. If you do not agree with the blocking, please use the feedback form
The discussion is closed. You can participate in the discussion within 24 hours after the publication of the article.
To participate in the discussion
log in or register
loader
Chats
Заголовок открываемого материала
Worldwide
InternationalEnglishEnglishMundoEspañolSpanish
Europe
DeutschlandDeutschGermanFranceFrançaisFrenchΕλλάδαΕλληνικάGreekItaliaItalianoItalianČeská republikaČeštinaCzechPolskaPolskiPolishСрбиjаСрпскиSerbianLatvijaLatviešuLatvianLietuvaLietuviųLithuanianMoldovaMoldoveneascăMoldavianБеларусьБеларускiBelarusian
Transcaucasia
ԱրմենիաՀայերենArmenianАҧсныАҧсышәалаAbkhazХуссар ИрыстонИронауОssetianსაქართველოქართულიGeorgianAzərbaycanАzərbaycancaAzerbaijani
Middle East
Sputnik عربيArabicArabicTürkiyeTürkçeTurkishSputnik ایرانPersianPersianSputnik افغانستانDariDari
Central Asia
ҚазақстанҚазақ тіліKazakhКыргызстанКыргызчаKyrgyzOʻzbekistonЎзбекчаUzbekТоҷикистонТоҷикӣTajik
East & Southeast Asia
Việt NamTiếng ViệtVietnamese日本日本語Japanese中国中文Chinese
South America
BrasilPortuguêsPortuguese
NewsfeedBreaking
16:57 GMTUK Chancellor Trails Minimum Wage Rise to £9.50 Ahead of Budget
16:49 GMTErdogan Says Crisis With Ambassadors Declared Personae Non Gratae Resolved
16:43 GMTUS Urges Germany to Consider Sanctioning Russia Over Gas Supplies
16:41 GMTCapitol Riot Planners Had Multiple Meetings With US Lawmakers Ahead of January 6, Reports Say
16:37 GMTFacebook CEO 'Personally Decided' to Comply With Hanoi's Demands, Ditching Free Speech Stance
16:33 GMTUK Calls on Sudanese Military to Release Arrested Politicians
16:24 GMTUS Marshal Probed for Sex at Work Accused of Using Employees to Do Home Assignments, Media Says
16:19 GMTAssange's Fiancée Says He Lost Weight in British Prison, Looks Unhealthy
16:14 GMTTaliban Say Will Welcome Possible Reopening of EU's Mission in Afghanistan
16:07 GMTGerman Centre-Left Coalition Sets Requirements for Nord Stream 2 Launch, Green Lawmaker Says
16:00 GMTDozens of US Vehicles With ‘Stolen Syrian Oil’ Reportedly Leave Arab Republic for Iraq
15:31 GMTMan United Fans Accuse Paul Pogba of Sabotaging Manager Ole Gunnar Solskjaer
14:59 GMTEx-Democratic Virginia Governor Bashes Kamala Harris Over Video in Support of Terry McAuliffe
14:32 GMTRussian MoD Summons German Military Attache Over Remarks on Nuclear Deterrence of Moscow
14:10 GMTNYC-Trump Organisation 'Court Battle': City May Use 'at Will' Clause to End Golf Course Contract
13:59 GMTWhat Is Known So Far About Military Coup in Sudan
13:54 GMTAfghanistan is Ready to Buy Iranian Oil, If Tehran Paves Way for It
13:54 GMTRussia Not Ruled Out as Eventual Shelter Country for Assange, WikiLeaks Editor Says
13:52 GMTBoris Johnson Admits COP26 Climate Summit Could be a Failure
13:32 GMTFacebook Whistleblower Haugen Testifies in UK Parliament