Brits Asked How Brainy or Stupid Public Figures Are 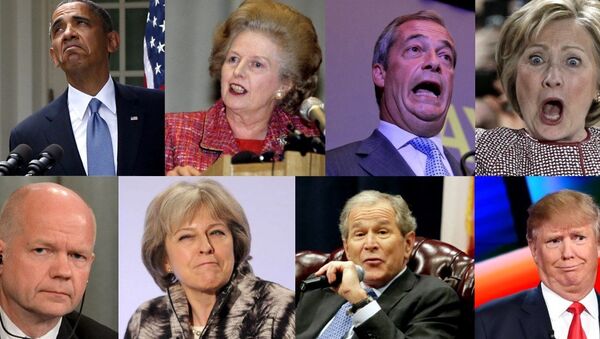 © Sputnik / Collage
Subscribe
In the absence of a real IQ battle between US Republican Presidential candidate Donald Trump and new London Mayor Sadiq Khan, 3000 British people have been asked who they think would win and rate the intelligence levels of leading public figures.

When it comes to intelligence, Khan beats Trump, Cameron beats Corbyn (according to voters) https://t.co/tiTpLGbSUu pic.twitter.com/sQ1ClLcPhR

Sadiq Khan accused Trump of being "ignorant" on his views on Islam, Trump responded by challenging Khan to an IQ test.

​However, that's unlikely to happen, so Internet polling company YouGov asked more than 3,000 British people what they thought.

Coming out on top is current US President Barack Obama, followed closely by the late Conservative leader, Margaret Thatcher and Democrat Presidential candidate Hillary Clinton and former UK foreign secretary William Hague — rated as having above average levels of intelligence.

At the bottom sits former US President George W. Bush, marginally ahead of him is Donald Trump. Then UK Health Secretary Jeremy Hunt and leader of the UK Independence party, Nigel Farage, all rated as having below average intelligence levels.

First appearance for Nigel Farge tonight.
That's one too many in my books #LE2016 #SP16 pic.twitter.com/CEnmz6citP

To recap, Trump and George W. Bush are at the bottom, with a below average intelligence rating — and Obama and Thatcher are perceived to be the most intellectual public figures at the top, London Mayor Khan is in sixth place.

Sadiq Khan's spokesman hits back at Trump call for IQ test: 'Ignorance is not the same thing as lack of intelligence.'

​So, if London Mayor Sadiq Khan did ever rise to Trump's IQ challenge, according to the British public it appears he would definitely win — if this survey and Trump's reputation is anything to go by.

000000
Popular comments
Nigel Farage is a genius. Obama as the most intelligent personality isn't evidenced in his policies.