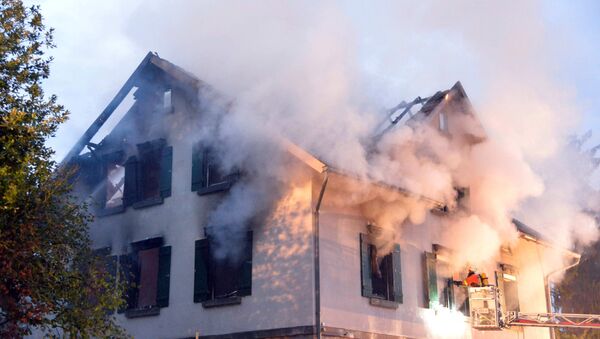 Germany accepted over a million asylum seekers in 2015, setting a record among all European states. Now, Berlin is struggling to deal with a backlash from the population, as more and more Germans express their anger at the unwelcome guests by attacking refugee shelters.

Forget Terrorists! Turkey Prefers to Not Let These Migrants Enter Europe
According to official statistics, in 2015 the country saw a fivefold upsurge in attacks against refugee centers, with 923 reported cases, compared to the previous year’s 175.

Statistics reveal that 90 percent of those who perform the attacks are young, far-right-wing males who have not previously had encounters with police.

Out of all reported offenses in 2015, 177 were violent attacks, with three attempted killings. The rest were non-violent acts, including graffiti which often invoked Nazi symbolism.

Germany Sends Out Over Half of Failed Asylum Seekers
Announcing the statistics, Interior Minister Thomas de Maiziere said that the country’s  migrant issue was paramount for authorities over the last year.

"The rise in right-wing politically motivated crime is above all evident in the xenophobic incidents," the interior minister told reporters. "That is unacceptable and will be met toughly by the police and justice system."

The hike in far-right offenses by natives against refugees, however, is well below the soaring numbers of crimes committed by foreigners. Some 402,741 offenses were registered in 2015, two and half times higher than the previous year, according to a report published by the German Interior Ministry, which chose to focus on the comparatively small number of retaliatory hate crimes.

According to the report, 75.7 percent of all pickpocketing was committed by non-Germans, while 34 percent was committed by recent asylum-seekers. Other categories in which these groups were over-represented included homicides (29.3 percent/8.2 percent), and sexual assaults (20.5 percent/4.8 percent).

Non-Germans accounted for 40.2 percent of burglaries, 43 percent of aggravated theft, and 38 percent of robberies, as reported by Breitbart News Network.

De Maiziere lamented that the number of far-right crimes this year is unlikely to decrease, with 347 crimes against migrants recorded to date.

"A decline in the number of political crimes is not to be expected in 2016 unfortunately."