Superflares: New Light Shed on Origins (and Demise?) of Life on Earth 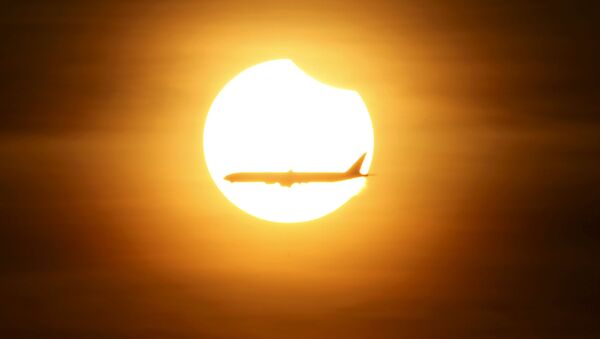 © REUTERS / Edgar Su
Subscribe
International
India
Africa
As scientists struggle to explain the emergence of life on Earth, over and over again they stumble on one question: how could life emerge on a planet that, at the time, was likely an “icy ball”?

It is believed that, about four billion years ago, when the first organisms evolved on Earth, the Sun was only about 70% as bright as it is today, resulting in Earth, at the time, being completely frozen. However, geological discoveries contradict that theory, instead suggesting that our planet was warm, and had liquid water.

Scientists call this problem the "Faint Young Sun Paradox." There are several theories that explain how the Earth could accumulate enough energy to spark the creation of life, in such harsh conditions. While some presume that Earth had much less cloud cover, which enabled more solar energy to reach the ground, others believe that it was atmospheric gases, especially nitrogen and hydrogen, that formed special ‘dimer' molecules as they collided, and those dimers were highly absorptive.

Recent observations of sun-like stars offer a new possible explanation. According to scientists at Goddard Space Flight Center in Greenbelt, Maryland, stars that are similar to our Sun, but much younger, are significantly more active. Observations of these stars using NASA's Kepler telescope show that, in the course of several rotations, they produce storms that our older Sun emits only once in a century.

These storms are called "superflares" and their power is enormous. The most powerful flares emitted by our Sun can release the TNT equivalent of some trillion megatons of energy in a span of several minutes. Superflares observed on distant stars are tens of thousands times more powerful. If our Sun was that active during Earth's early days, it could have warmed our planet effectively enough for life to emerge.

Goddard Space Flight Center scientists suggest that such an effect would have been primarily indirect. According to scientist Vladimir Airapetian, such immense solar storms would have changed Earth's atmospheric chemistry, causing nitrogen to split to molecular nitrogen, which, in turn, would cause atmospheric carbon dioxide molecules to split into carbon monoxide and oxygen. Much of the free-floating nitrogen and oxygen would then have combined into nitrous oxide — a greenhouse gas 300 times more potent than carbon dioxide.

According to Airapetian, this could have been made possible by Earth's weak magnetic field, as it was by that time strong enough to deflect much of the solar particles known as "solar wind." When solar wind does penetrate Earth's atmosphere, it results in a spectacular effect known as "northern lights," or aurora borealis. Solar magnetic storms of this nature can disrupt power grids and satellite navigation even today.

According to an international research team led by Christoffer Karoff from Aarhus University in Denmark, the Sun is still capable of producing a superflare that could kill most species on Earth. The team studied 5648 Sun-like stars, via the Kepler telescope, 48 of which produced superflares. Their observations were later supplemented by world's largest spectral telescope, LAMOST (Large Sky Area Multi-Object Fibre Spectroscopic Telescope).

While today's observation methods allow for predicting a sun flare some three days prior to the event, if a superflare occurs, there would only be enough time to empty your bank account and spend it all, before life would be obliterated on Earth.