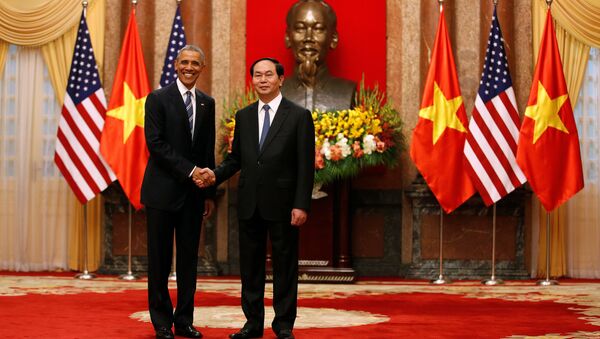 © REUTERS / Carlos Barria
Subscribe
China hopes that the developing ties between the United States and Vietnam will contribute to regional peace and stability. The statement comes from the Chinese Foreign Ministry after the United States ended its decades-old embargo on lethal arms trade with Vietnam.

Carlyle Thayer, Emeritus professor at the Australian Defense Force Academy, spoke to Radio Sputnik about the lifting of the embargo and how it will affect the relations of regional powers.

“China can’t oppose any one country preparing itself for self-defense in buying weapons from any one country. It buys weapons from Russia and so does Vietnam. Its press will be much more critical but there is a mature relationship between China and the US.”

China Welcomes Thaw in US-Vietnam Relations as Arms Embargo Lifted
“China is in there competing for influence in Hanoi along with the United States, so too harsh a line will create no space for Vietnam so it is a very measured response,” Thayer said.

He further said that this decision is mainly political as Vietnam has wanted the removal of embargo which it saw as a political discrimination.

Obama had done it with Cuba, Iran and strengthened relations with Myanmar. Hence, he announced this move with Vietnam on Monday at a joint press conference with his Vietnamese counterpart, Tran Dai Quang.

Talking about the future relations between the United States and Vietnam, the analyst said that this will not in his opinion lead to big ticket purchases of weapon systems from the United States.

“Vietnam is firmly locked into purchasing from Russia. All its maintenance and repair crews all have been schooled in Russian technology- military handbooks, military equipment that’s what it’s going to remain in Vietnam.”

He further said that Vietnam has been importing weapons from Russia for many years and it has helped the exporters as well. There is a joint cooperative in oil and petroleum industries between the two countries and their relationship is very old, dating back to the Cold War.

“Vietnam is a bridge for Russia to Southeast Asia,” Thayer said.

The analyst then spoke about Vietnam’s position in the international arena and whether the country will be able to continue maneuvering between China and the US now that the embargo has been lifted.

On Monday, President Obama held his first meeting with Vietnam’s communist leadership as part of his landmark three-day visit to the country. The trip is aimed at improving relations and deepening cooperation between the two long-time rivals.

However, it has been suggested by some analysts that Obama will also strive to seal the transformation of an old enemy into a new partner to help counter China’s alleged aggression in the region.