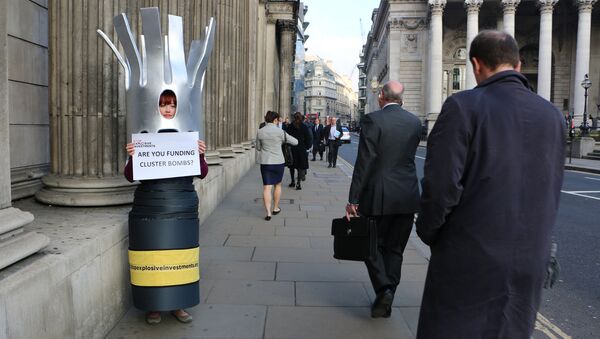 Amnesty International has called on the UK Government to answer questions on the use of cluster munitions in the Yemen war.

Prime Minister David Cameron is facing harsh questions from Amnesty International on the use of UK-manufactured banned cluster bombs in the Yemen conflict.

The Saudi-led coalition according to Amnesty have been using the UK-manufactured 'BL-755' cluster bomb within the conflict according to experts at the NGO who found a partially exploded bomb near the Yemen-Saudi border.

This discovery has led Amnesty to write a letter to Prime Minister David Cameron, urging him to speak up about any involvement the UK may have had in providing UK weaponry to the Saudi government, who have in turn used it in their military bombing campaign in Yemen.

Dear @PHammondMP what is UK going to do to clean up UK made cluster bombs that #Yemen's kids think are footballs? https://t.co/EJUn1ER0Qj

The conflict in Yemen has already seen thousands of civilian deaths, the most recent taking on Monday 23 May 2016, where a further 45 people died in a deadly explosion in the southern city of Aden.

The coalition has repeatedly used cluster bombs during the war in Yemen, and they have dropped them in overcrowded areas which have a high population of civilians. According to the Human Rights Watch, this type of activity by the Saudi government constitutes a war crime.

The bombs are dropped in civilian areas in an attempt to target the Houthis rebels. The use of cluster bombs in Yemen has contributed to more than 2,800 civilian deaths.

A report by charity Save the Children, titled "Ending Yemen's Conflict Now a Matter of Life and Death for Millions of Children," showed that the majority of civilian deaths were in fact those of young children.

Ending #Yemen’s Conflict Now a Matter of Life and Death for Millions of Children https://t.co/3zxfzQyxqd #YemenCrisis

It is for this reason that Amnesty has called for an urgent reply from the Prime Minister. The NGO has reported that the bombs were originally manufactured by a government contractor, Bedfordshire company, Hunting Engineering LTD in the 1970s.

This is the first clear piece of evidence of the suspicion that the Saudi coalition have in fact been using British cluster bombs in their attacks on Yemen.

The BL-755 bombs are in fact banned under international law as they do not tend to detonate until they are picked up. Worse still, according to the NGO, these bombs tend to be dropped by UK RAF Tornado fighter jets sold to Saudi Arabia. Amnesty is therefore, demanding that the UK government answer questions on any potential involvement they may have had as it would be a breach of the Britians involvement in the Convention on Cluster Munitions.

"Given that this type of cluster bomb is very likely to have been used in combination with Tornado war planes which the UK has also sold to Saudi Arabia, there's even a possibility that British support personnel might have been involved in the cluster bombing of Yemen. This would be an absolute scandal if confirmed," Oliver Sprague, Amnesty's International UK Arms Director, told Sputnik.

The findings from the NGO came from interviews and eyewitness reports that state they had seen the cluster bombs and those who had manufactured them.

"Cluster bombs are one of the nastiest weapons in the history of warfare, rightly banned by more than 100 countries, so it's truly shocking that a British cluster munition has been dropped on a civilian area in Yemen," Sprague told Sputnik.

Amnesty are now calling for a full investigation into the latest discovery and for those who are responsible to be held accountable.