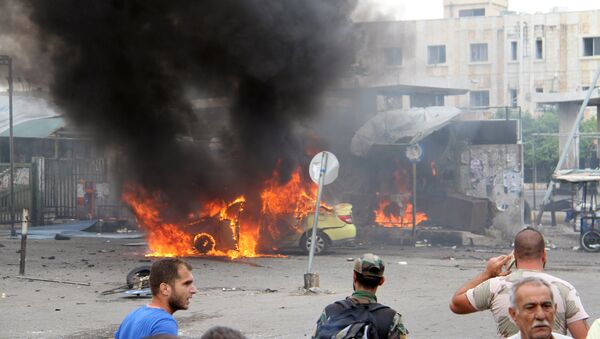 Three consecutive explosions took place near a bus station in the city of Jabla reportedly leaving several civilians dead and wounded, and the fourth blast rocked a local hospital. Several explosions occurred at a bus terminal in the coastal city of Tartus. The death toll has exceeded 100, according to local police.

#Syria city of Jableh in #Latakia targeted by militant rockets this morning. pic.twitter.com/ZoGfVVc3wt

​“Three consecutive explosions happened next to the bus station in the city of Jabla. There are dead and injured. Suicide bombers most likely detonated themselves,” the employee told RIA Novosti by telephone.

Some reports suggest the city was shelled.

"The fourth explosion took place in the Jabla hospital. Seemingly, a suicide bomber detonated himself after entering the hospital pretending to be helping the people wounded in the previous blasts."

Over 70 people were killed.

Soon after the Jabla attack, several blasts occurred at a bus terminal in the coastal city of Tartus.

Images released by the NDF of the bombing in Tartus #Syria pic.twitter.com/SX2Rzr83Tu

"Two or three blasts occurred at the new Tartus bus terminal. One of them took place close to a state gas station. The police and army have cordoned off the area. People are helping doctors to evacuate the wounded and the dead", a witness told RIA Novosti.

4 explosions hit #Tartus city, in bus station, near Gas station, and near Al-Basel hospital.
First explosion was the biggest, followed by 3

​At least 30 people were killed in the triple terrorist attack.

Daesh claimed responsibility for the attacks.

Syria has been mired in civil war since 2011, with government forces loyal to Syrian President Bashar Assad fighting numerous opposition factions and extremist groups including Daesh.

​“According to our figures, as a result of seven explosions more than 100 people died. Many of the seriously injured are hospitalized in Jabla and Tartus,” the police told RIA Novosti.