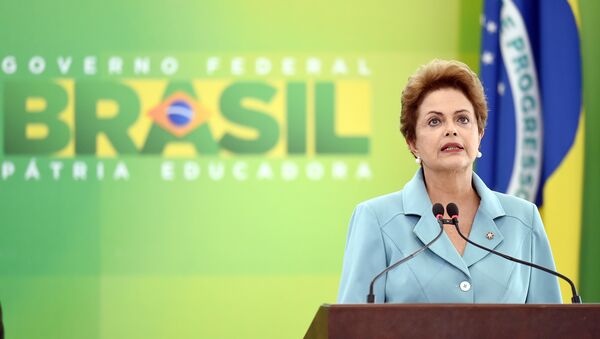 The conversation centered on "changing" the government to "stop the bleeding" revealed by the so-called Car Wash investigation into Petrobras’ corrupt practices. Both men are being actively investigated for corruption under the probe, and Juca resigned from his position on Monday.

The leaked conversations feature Juca contemplating a possible Michel Temer government, with a condition that the ongoing probe be dissolved. This conversation took place just weeks before Rousseff was suspended from her post amid impeachment proceedings.

Rousseff is accused of manipulating financial data to hide a growing public deficit ahead of her 2014 reelection, and was suspended from office for 180 days, after senators voted 55 to 22, pending a full impeachment trial.

In such a trial, if 2/3 of the Brazilian senate (54 of 81 members) vote to oust Rousseff, she will be barred from the presidency for life.

The senate vote to advance the impeachment process occurred despite procedural irregularities in the lower house led by Eduardo Cunha, a politician featured in the Panama Papers who also has dozens of Swiss bank accounts. Many Brazilians believe that the powerful Cunha bribed members to support impeachment.

For a moment it appeared that the besieged Rousseff would receive a reprieve from the impeachment vote, after Cunha was ousted by the Supreme Court in relation to ongoing corruption charges. Cunha was replaced by Waldir Maranhao, who immediately called to annul the lower chamber vote.

Maranhao’s attempt to halt the impeachment was dashed by the head of the Senate, Renan Calheiros, a political ally of both Temer and Cunha, with all three men members of the opposition Brazilian Democratic Movement Party. Calheiros announced that the vote would continue, with the issue already abdicated by the lower house to the Senate.

Facing a constitutional crisis, Maranhao quickly rescinded his calls for annulment and the impeachment against the Brazilian president proceeded.

During the emotional process, which has featured amusing and absurd references to gangrene, God, the Devil, and numerous calls by lawmakers for voters to reelect them, the Senate president’s tooth fell out of his mouth on live television while he was speaking.

Dilma Rousseff speaks out against the impeachment process

The suspended Brazilian president has taken to calling the impeachment a coup, as well as an affront on the democratic process. She blames the old Brazilian oligarchy, that, while clamoring for austerity and a sell-off of the country’s natural resources for private profit, has been unable to democratically implement their conservative economic imperatives on a country that has elected the Workers Party, which advocates for a strong social safety net, in four consecutive elections.

"This coup is not like usual coups in Latin America, which normally involve weapons, tanks in the streets, arrests and torture," said Rousseff. "The current coup is happening within the democratic framework, with the use of existing institutions in support of indirect elections not stipulated in the constitution. This coup is carried out by hands tearing apart the Brazilian Constitution."

Brazil has been mired by protest and disorder, only months ahead of hosting the 2016 Summer Olympic Games. Brazilians fear that even a temporary government under Michel Temer will result in painful austerity measures disproportionately impacting the country’s poorest, alongside a sell-off of natural resources to Western multinational corporations.

Nonetheless, the situation has not yet dissolved into a major social convulsion. Many Brazilians expect that former president and founder of the Worker’s Party, Luiz Inacio Lula da Silva, will seek election in 2018, with public opinion polls showing him winning an electoral bid in a walk against Temer, who is supported by less than 2% of the population.

Brazilian activists worry that if Rousseff is ultimately impeached and if the Brazilian oligarchy succeeds in disqualifying Lula da Silva from seeking election in 2018, that the country could see violent revolution. At the moment, however, many hope that the impeachment will be unsuccessful, and become revealed as a simple effort by corrupt oligarchs to make a probe into their criminal activities disappear.