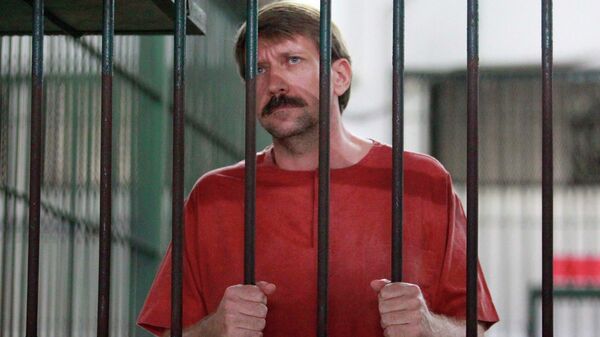 © Sputnik
Subscribe
International
India
Africa
Victor Bout, a Russian citizen convicted to 25 years in US jail for conspiring to kill American citizens by providing arms to Colombian militants, can’t be legally held accountable for the crimes he is accused of, his lawyer, Alexey Tarasov, told Sputnik.

Moscow Accuses US of Forcing Unlawfully Detained Russians to Plead Guilty
In 2015, presiding Judge Shira Scheindlin ruled not to overturn the sentence for Bout. The ruling was followed by an appeal by the defense team. Bout’s defendants will respond to the prosecutors’ arguments for an appeal to reconsider the case before June 2.

Tarasov explained that Bout “couldn’t have been legally held accountable for crimes he was charged with,” because conspiracy is only possible under US legislation if all parties involved are aware of it. Bout, the lawyer stressed, was deceived by his alleged partner-in-conspiracy, Andrew Smulian, as the latter "apparently" knew of a US security service operation.

“In this case we have presented evidence that [Smulian] knew of the operation before it began and was cognizant of the ultimate goal of the operation, which was to convince Viktor Bout to come to Thailand,” Tarasov underscored.

“[Smulian] participated in this deal all the way knowing that at the end of the operation Bout would be taken down, and he [Smulian] would receive very lenient treatment. And that is exactly what happened.”

Russia
US Likely to Reject New Repatriation Requests by Yaroshenko, Bout
The fact that the same judge handed down the five-year-sentence to Mr. Smulian compared to that of 25 years to Bout “seems to be at odds,” he said.

Scheindlin, who stepped down as a judge on April 29, admitted that the punishment for Bout was "excessive and inappropriate," adding that she gave out the shortest possible sentence.

If the defense team has an adversary decision from the United States Court of Appeals for the Second Circuit, Tarasov said, it will open a petition to the US Supreme Court to "force the possibility of a transfer [of Bout] to Russia."

This is not the first controversial trial started by the US against Russian nationals. Earlier, pilot Konstantin Yaroshenko was jailed for 20 years for conspiring to make a $100 million delivery of cocaine to the US.