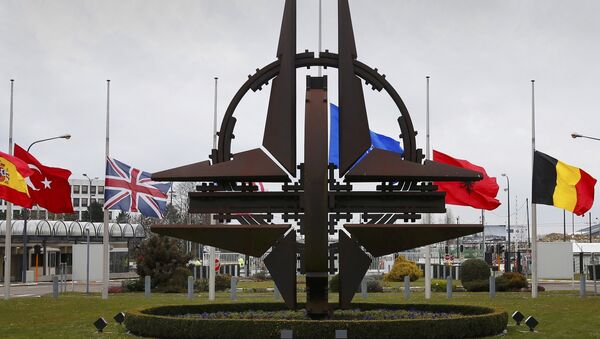 © REUTERS / Francois Lenoir
Subscribe
Divisions are growing among NATO country members over the need to restore dialogue with Russia, an article in Financial Times read. Concerns are growing that the standoff between Moscow and the West is getting out of control.

Stoltenberg: ‘NATO Does Not Want New Cold War’ With Russia
The newspaper made the assumption as a result of two days of talks between NATO foreign ministers and chiefs of general staffs. The meeting took place in Brussels on May 19-20.

During the talks, representatives of France and Germany pushed for rapprochement with Moscow and holding a session of the Russia-NATO Council during the July summit in Warsaw. Other NATO members were skeptical about the idea.

For example, one Eastern European diplomat told the Financial Times that talks with Russia were not to calm Moscow but to "reassure people in Brussels, people who worry too much about angering [Russian President Vladimir] Putin."

He added that Russia is just "playing games with NATO."

The "war of words" between Russia and NATO is getting increasingly "worrisome and bellicose," the article read.

NATO plans a major military buildup at its eastern flank, and Moscow has promised to respond. Earlier this week, British General Richard Shirreff warned that the prospect of a full war with Russia within a year.

This triggered a "bout of soul-searching within NATO" over the need to de-escalate the tensions.

"It’s wildly speculative and inflammatory, and I’m afraid from where I sit it does look as though it is related to maximising publicity," Hammond told Financial Times.

He added that dialogue is the "best way" to de-escalate tensions with Russia.

In Turn, NATO Secretary General Jens Stoltenberg said that the alliance is trying to avoid "misunderstandings, misinterpretation and miscalculations" in order to make sure "things are not spiraling out of control."

NATO has repeatedly claimed Russia is a threat, thus justifying their military buildup in Eastern Europe. The alliance plans to deploy four or five battalions in the Baltics and Poland. The decision is due to be made at the summit in Warsaw. Moscow has said that Russia is not interested in confrontation but ready to give an adequate response to the NATO strategy.

000000
Popular comments
It's a sad indictment of the moral state of the British establishment that a former general has to stoop to warmongering just to try and sell a fantasy war novel. It can't be a very good book if Shirreff needs to pull tacky stunts like this. The chances are however that it's done in coordination with Cameron.

Angus Gallagher
22 May 2016, 15:28 GMT4
000000
This was expected but it also means that the US just have to start something nasty again, like the war in Novorossiya, that it can blame Russia for in order to rein their vassals in. So f:ing predictable.