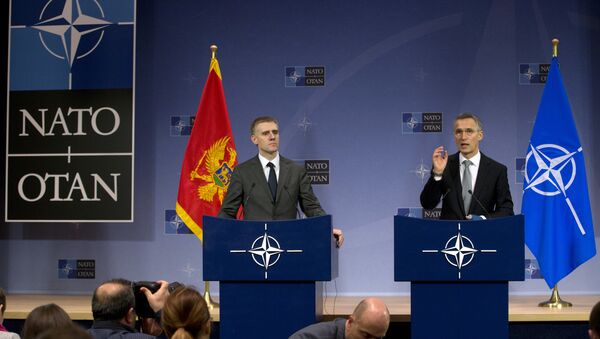 © AP Photo / Virginia Mayo
Subscribe
NATO is planning to attract new members in the Balkans and in Eastern Europe. The move is aimed at encircling Russia and could lead to the destabilization of the European continent, German newspaper Deutsche Wirtschafts Nachrichten (DWN) reported.

Montenegro Hopes to Secure Full NATO Membership in 2017
NATO claims the right to be militarily active throughout the world "in order to defend the US and the EU," DWN wrote, referring to a statement of NATO Secretary General Jens Stoltenberg.

"In addition to its expansion activities in the Middle East and the Gulf States, this also includes the expansion in Eastern Europe," the article said.

On Thursday, foreign ministers of 28 NATO countries signed a protocol on Montenegro's admission to NATO. So far, Montenegro has been granted only an observer status, but once ratification is completed, the country will become the 29th member of the military alliance.

"A NATO membership would give Montenegro an opportunity to become a regional power. This development could inspire other countries like Macedonia and Bosnia to seek NATO membership as well," the newspaper noted.

According to DWN, such developments might lead to further tensions with Russia,which perceives NATO's activities near its borders as a threat to its national security.

"The expansion itself generates a psychology of frontline states, in essence creating new or moving old dividing lines in Europe and contradicts the necessity of creating a new system of collective security of the continent," Russia's envoy to NATO Alexander Grushko said earlier.

NATO Build-Up in Europe Continues With Montenegro Joining Alliance
There is no NATO military presence in Montenegro so far. But the country's ports in Bar and Porto are regarded as potential NATO bases. These ports have already been used as part of the NATO mission "Operation Active Endeavour" in 2015, Balkan Insight reported.

According to German magazine Der Spiegel, NATO pursues its geostrategic goals on the Western Balkans and tensions with Moscow are unlikely to stop it from further expansion.

"Russia is irritated by the NATO invitation to Montenegro. But for the alliance it is about the influence on the Western Balkans. Therefore, Brussels obviously does not care about the lack of democratic standards in the small state," the magazine wrote.

Since the end of the Cold War, the military alliance has already accepted twelve new members, in particular from Eastern Europe, DWN noted. According to DWN, NATO is likely to make Montenegro its full-fledged member despite any protests on the part of Russian authorities.

000000
Popular comments
Reminds one of stuffed turkey just as the countries to join the alliance are stuffed in the NATO package for delivery to USA. And by the way .........has NATO Jens Stoltenberg given the FBI access to the Norwegian labour market? www.rt.com/usa/343981-fbi-secret-biometric-database
ptcjm
22 May 2016, 17:49 GMT1
000000
NATO security? Watch Lybia, Yugoslavia, Syria, Afghanistan, Yemen or Turkey. This is all about keep Russia out of selling military equipment and replace them with US equipment. And burden nations economies, of course
Glamoureus
22 May 2016, 17:55 GMT1
000000
Newsfeed
0
New firstOld first
loader
LIVE
Заголовок открываемого материала
Access to the chat has been blocked for violating the rules . You will be able to participate again through:∞. If you do not agree with the blocking, please use the feedback form
The discussion is closed. You can participate in the discussion within 24 hours after the publication of the article.
To participate in the discussion
log in or register
loader
Chats
Заголовок открываемого материала
Worldwide
InternationalEnglishEnglishMundoEspañolSpanish
Europe
DeutschlandDeutschGermanFranceFrançaisFrenchΕλλάδαΕλληνικάGreekItaliaItalianoItalianČeská republikaČeštinaCzechPolskaPolskiPolishСрбиjаСрпскиSerbianLatvijaLatviešuLatvianLietuvaLietuviųLithuanianMoldovaMoldoveneascăMoldavianБеларусьБеларускiBelarusian
Transcaucasia
ԱրմենիաՀայերենArmenianАҧсныАҧсышәалаAbkhazХуссар ИрыстонИронауОssetianსაქართველოქართულიGeorgianAzərbaycanАzərbaycancaAzerbaijani
Middle East
Sputnik عربيArabicArabicTürkiyeTürkçeTurkishSputnik ایرانPersianPersianSputnik افغانستانDariDari
Central Asia
ҚазақстанҚазақ тіліKazakhКыргызстанКыргызчаKyrgyzOʻzbekistonЎзбекчаUzbekТоҷикистонТоҷикӣTajik
East & Southeast Asia
Việt NamTiếng ViệtVietnamese日本日本語Japanese俄罗斯卫星通讯社中文（简体）Chinese (simplified)俄罗斯卫星通讯社中文（繁体）Chinese (traditional)
South America
BrasilPortuguêsPortuguese
NewsfeedBreaking
12:27 GMTREC Surveys Exporters’ Wishes for ‘Single Window’ Development
12:21 GMTNew Huge Space Cavity of Unknown Origin May Explain How Stars Are Born, Scientists Suggest
12:11 GMTTaliban Still Waiting for US Response on Unfreezing Afghan Assets, Deputy Minister Says
12:02 GMTPowerful 6.3-Magnitude Earthquake Hits Adak, Alaska
11:50 GMTTexas Sec of State's Office Announces 'Full Forensic Audit' of 2020 Election in Four Counties
11:49 GMT'Georgina is a Great Support to Cristiano': Ronaldo's Mom Denies Rift With His Girlfriend
11:40 GMTCongress is a Sinking Ship, Says BJP-Allied Nishad Party Chief in Poll-Bound India's Uttar Pradesh
11:33 GMTFinal Countdown: Who's Leading in Polls Ahead of German Federal Elections?
11:27 GMTMexican Authorities Block Haitian Migrants From Crossing Into US, Seal Off Makeshift Camp
11:26 GMTErdogan Expects Russia to Change Approach to Syria
11:14 GMTIndia's Top Investigative Agency to Probe Influential Monk's Mysterious Death
11:13 GMTSabina Nessa: Police Ask For Help in Identifying Man After Teacher Murdered in London Park
11:11 GMTUK Ministry of Defence Confirms Second Afghan Data Breach, Vows to Prevent New Ones… Again
11:06 GMTKim Jong-un's Sister Responds to Seoul's Proposal to Officially End the Korean War
11:01 GMT'Actors Started Taking Liberties With Me': Actress Mallika Sherawat Recalls Facing Casting Couch
10:58 GMTMerkel Ignored Biden When He Wanted to Make Her His First Call as POTUS, Report Says
10:28 GMTTaliban to Submit Complaints to UN Over US Shooting at Kabul Airport
10:27 GMTEchoes of Tony Blair’s Fuel Crisis in 2000 as UK Petrol Stations Run Out Due to Trucker Shortage
10:18 GMTAUKUS Creation Resulted in Loss of Trust in Biden Administration, Merkel's Ex-Adviser Says
10:13 GMTCumbre Vieja Volcano Erupts on La Palma Island