UN Chief Calls for Start of Talks on Transition in Syria 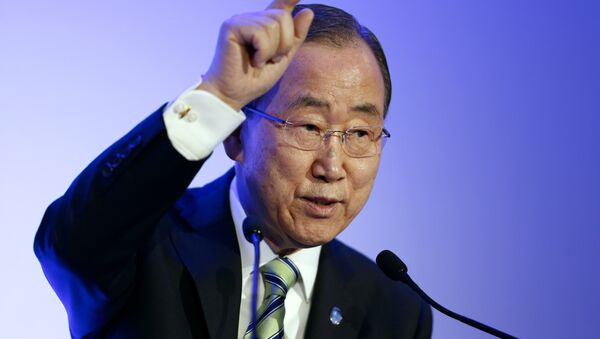 Ban Ki-moon said that the parties to the Syrian civil war should start discussions of the transition.

Syrian Political Transition Must be 'Syrian-Owned,' 'Syrian-Led' - ISSG
MOSCOW (Sputnik) — UN Secretary-General Ban Ki-moon said that the parties to the Syrian civil war should start discussions of the transition to settle the conflict.

"We need a full and immediate cessation of hostilities [in Syria]. Just as important, we need to begin discussions on the transition. I fear that without such a political horizon, a further escalation is all too likely," Ban said at the Doha Forum on Saturday.

Ban added that he called all "regional and international actors" to influence on the parties to the Syrian conflict to make them negotiate on "transitional arrangements."

Syria has been in a state of civil war since 2011, with government forces fighting both moderate opposition and terrorist groups.

The creation of a transitional government has been a divisive topic for the opposition and government negotiators in Geneva, which hosts intra-Syria settlement talks, with Damascus vying for the formation of a national unity government representing all political forces.