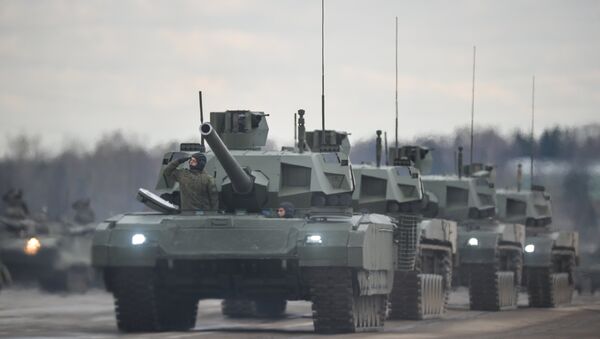 The T-14 Armata, rolled out for the first time during the 2015 Victory Parade in Moscow, brandishes a constellation of characteristics which make it an author of a new chapter in the battle tank industry.

Thanks to stealth technology, the machine is practically invisible in infrared and other spectrums. It is equipped with an active electronically scanned array (AESA, or active phased array radar, APAR) similar to the one designed for Russia's T-50 PAK FA 5th generation aircraft.

The radar and cameras are meant not only for combat against an enemy but also for reconnaissance and fire adjustment.

Locked and Loaded: T-14 Armata Tank, the Armored Pearl of Russia
The tank's armament includes a 125mm smoothbore cannon and a 7.62mm remote-controlled machine gun. In the future the tank can be transformed into a heavy self-propelled gun with a 152mm weapon.

But the Armata's technology stretches way beyond the T-14. The platform serves as a basis for the T-15, a heavy infantry fighting vehicle which will be augmented with a drone. A pilotless, robotic version of the tank is also envisaged. In addition, Russia intends to develop a tank support fighting vehicle dubbed the Terminator-3 using the Armata platform.

Moreover, the Koalitsiya-SV self-propelled gun is expected to be upgraded with this platform.

The Armata tank's main feature is its unmanned turret. The crew of three is seated in an armored capsule in the hull's front, which is separated from the stowage area. This construction gives the crewmen a greater chance of survival if the tank's ammunition explodes.

The armored capsule, unmanned turret, an APAR radar and active defense weapons make the T-14 Armata a unique vehicle capable of intercepting all kinds of currently operational anti-tank arms. This cascade of characteristics makes the T-14 Armata nearly invincible on the battlefield.

India, China, Egypt and several other countries have queued up for the T-14. But the Russian Army's needs remain a priority. The first batch of 100 tanks will enter service next year and 2,500 vehicles will join the Army by 2025, according to the Defense Ministry.