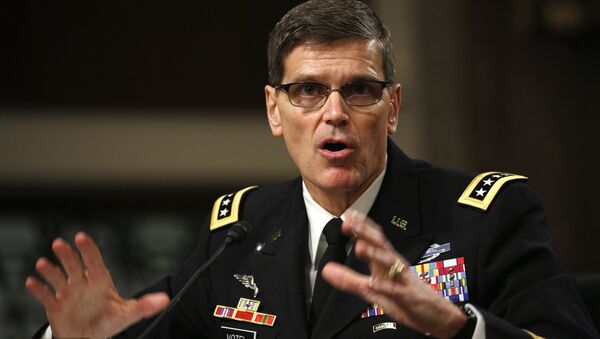 The commander of US Central Command, responsible for the Middle East, Northern Africa and Central Asia, made a secret visit to Syria to discuss Raqqa assault.

MOSCOW (Sputnik) — US Army Gen. Joseph Votel, who is the commander of US Central Command (CENTCOM), responsible for the Middle East, Northern Africa and Central Asia, made a secret visit to Syria, US media reported.

US Special Presidential Envoy for the Global Coalition to Counter ISIL confirmed the fact that the CENTCOM commander had visited Syria.

While #ISIL leaders are reduced to audiotapes in the dark, @CENTCOM commander GEN Votel was in #Syria preparing push to #Raqqa. #ISIS #Daesh

​Votel arrived in the Middle Eastern nation for a day-long visit to attend the places, where US special operations forces were located and meet the local forces trained by US specialists, CNN reported on Saturday.

US-Led Coalition Targets 17 Daesh Sites in Syria, Iraq
According to the broadcaster, Votel is the highest-ranking US military official, who has visited the crisis-torn Syria, since the beginning of the civil war.

​Syria has been mired in civil war since 2011, with numerous opposition factions and Islamic extremist groups fighting the Syrian Arab Army in an attempt to topple the government of President Bashar Assad.

Since the beginning of the Syrian conflict the United States and its allies have provided military support to opposition factions they consider "moderate" and have called for Assad to resign. As part of this support, Washington has deployed several hundreds of special operations forces into Syria to train and equip moderate rebels to combat radical Islamists.