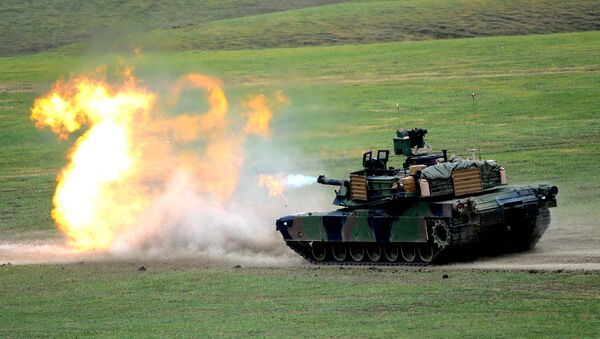 © AFP 2022 / Vano Shlamov
Subscribe
The US Army created five countries with elaborate backstories to use as potential adversaries in its military drills. Unsurprisingly, these fictional political entities resemble existing countries and Russia is one of them.

A document titled "Decisive Action Training Environment (DATE)" contains all the information on the five fake countries – Ariana, Atropia, Donovia, Gorgas and Limaria – and how to use them in wargaming scenarios. Its most recent version was released in April 2015.

"Each country has detailed political structures, economic considerations, troop types, military equipment and other features that would impact how American soldiers might operate in it during a shooting war. A central story-line links their narratives together in a common, imaginary world," journalist Joseph Trevithick wrote for the War is Boring website.

'Inverting Reality': Why Pentagon Wants Russian Military to Be 10 Feet Tall
The fake nations that are located in the Caucasus region most likely serve as stand-ins for Russia (Donovia), Iran (Ariana), Azerbaijan (Atropia), Armenia (Limaria) and Georgia (Gorgas), although they are not officially modeled on any particular state.

Take Donovia, for instance. The DATE handbook, which War is Boring obtained through a Freedom of Information request, described the country as "a resurgent nation that, prior to the early 1990s, was the region's dominant political, economic, military, and social player."

"Internal turmoil lessened Donovia's influence during the period from the 1990s to around 2000. Now, riding a wave of higher oil prices, a reinvigorated Donovia seeks to rebuild its prior levels of regional and international influence through a combination of assertive diplomacy and military power," the document added.

This is the Real Threat to US and Its 'Gargantuan' Military Budget
This description matches the way Washington and the North Atlantic Alliance frame Russia's behavior and strategies. Senior US and NATO officials have repeatedly described Russia as "resurgent" and "assertive" for its alleged meddling in the Ukrainian crisis and independent foreign policy.

For its part, Moscow has always maintained that it is not a party to the Ukrainian conflict and has made every effort to resolve the deadly civil war.

Ariana was apparently loosely modeled on Iran. The country, according to the document, has large energy reserves in its southwest region along the Persian Gulf.

"Ariana's government is aggressive, capable, revolutionary, and intent on spreading its vision of Islamic governance and the establishment of a new Arianian hegemony throughout the region. Ariana mobilizes target populations through politicization of Islam to accomplish its long-term goals," the document detailed.

This account reflects claims, often heard in Washington, Tel Aviv or Riyadh, accusing the Islamic Republic of fomenting unrest across the Middle East. Tehran has denied these assertions.