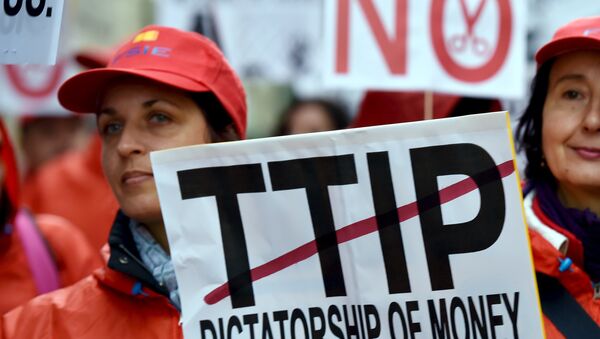 Cameron was facing defeat in a vote in the House of Commons over an amendment to the Queen's Speech — delivered on May 18, to set out the plan of legislation for the current parliament – to pass a law specifically excluding Britain's National Health Service (NHS) from the TTIP trade deal. The UK population is fiercely protective of its health service.

#TTIP has become such a toxic issue it could result in a historic defeat for the government
https://t.co/4MnYhzGzln pic.twitter.com/jCLXeesnki

Critics said that – if health services were part of the TTIP trade deal – US multinationals would be able to bid for the right to run health services in a manner unacceptable to most in Britain. Moreover, differing regulatory regimes exist on medicines and other health issues between the US and the European Union.

"The fact that the government is facing a backbench rebellion on the Queen’s Speech over the issue of TTIP is testament to just how toxic an issue this trade deal has become."

"In the space of a couple of years, TTIP has gone from an obscure acronym, to a massively controversial issue that has not only been a key issue in the EU referendum debate, it could now threaten the government’s first defeat over the Queen's Speech in 92 years."

"MPs are right to push the issue over the need to protect the NHS and other vital public services from the threat of TTIP."

"Polls have constantly shown just how important the NHS is to voters in the UK, but the government has been steadfast in its refusal to explicitly and bindingly rule it out of the negotiations. This is despite the fact that public health services in other countries have been attacked under similar trade deals," said Dearden.

Across Europe, there have been fears over the effect of the TTIP deal on people's health, the environment and the food people eat.

Brigitte Bardot: EU-US Trade Deal 'Madness'
Food regulations in the EU and the US are different, with the EU being less open to genetic modification. In order to have a trade agreement, the two sides need to agree on a common regulatory framework.

However, the EU currently excludes beef and pork, treated with growth hormones, chicken washed in chlorine, fruit and vegetables treated with endocrine-disrupting pesticides and genetically engineered and modified foods, all of which are common in the US.

On health issues, critics of TTIP argue that differing medicine approval regimes exist on both sides of the Atlantic and that big US multinationals will dominate the pharmaceutical sector.