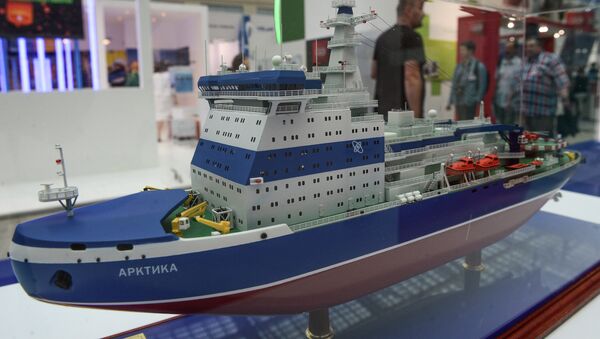 Russia’s maiden Project 22220 nuclear-powered icebreaker dubbed "Arktika" will be floated out at the Baltic Shipyard in the summer of 2016 ahead of its late 2017 planned launch, the nuclear icebreaker fleet operator’s chief said Friday.

MOSCOW (Sputnik) – Previous reports placed the launch date for the vessel billed as the world’s largest and most powerful vessel of its kind at May 26, to coincide with the 160-year anniversary of the Baltic Shipyard.

"The launch is somewhat postponed, for a time determined in weeks, but not more than a month," Rosatomflot Director General Vyacheslav Ruksha told RIA Novosti, noting that the moved schedule was "absolutely uncritical."

Ruksha lauded the shipyard, part of the United Shipbuilding Corporation, for continuing work despite the financial difficulties.

"I am confident that we will complete the assembly of the icebreaker’s large equipment before the end of this year. The icebreaker will be completely ‘assembled’ before the summer of 2017, then nuclear fuel loading will start. In any case, we aim to enter the mooring trials by the end of 2017, as stated in the contract," Ruksha said.

World
Private Sector Interest in Icebreakers Grows as Arctic Trade Opens
A Project 22220 icebreaker is 189.5 yards long and 37.1 yards wide. The ship displaces 33,540 metric tons. The icebreakers are fitted with two specifically designed RITM-200 nuclear-power reactors. The new vessels will be able to escort convoys in the Arctic, breaking ice up to 10 feet thick and 13 feet deep.

In 2014, the Baltic Shipyard signed a contract worth 84.4 billion rubles ($1.2 billion under the current exchange rate) with Russia’s state-run atomic energy agency Rosatom to build two Project 22220 icebreakers by 2020. The ships will be commissioned in December 2019 and December 2020 respectively.