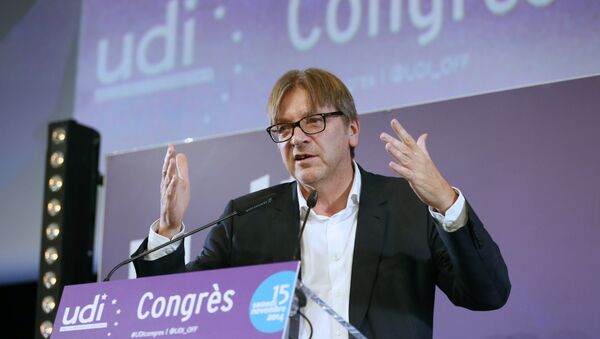 Guy Verhofstadt, the former Belgian prime minister has admitted that the European Union as it currently stands is on brink of collapse due to the migrant crisis, the Eurozone wobbles and the possibility of a Brexit forcing fundamental reforms on the union.

Verhofstadt told the Press Club on Europe 1 radio: "Europe will never find its way out of the crisis because it has not got enough institutions. We should go back to the principles of the fathers of the European Union."

​(Tweet: "We should go back to the principles of the fathers of the European Union.")

Discussing his latest book 'Europe’s Disease and the Rediscovery of the Idea' he told Le Monde newspaper:

"I think it is meaningless to say, as some do, that 'Europe is not so bad', it has assured us decades of peace, etc. Euroskeptics are not wrong when they criticize its inability to respond to the various crises that beset us. And we do not defend by saying that it can continue to operate as it does today. If it is not rectified, it will disappear."

The original principle of the founding fathers of what is now the European Union – who included Konrad Adenauer, the first Chancellor of the Federal Republic of Germany, British Prime Minister Winston Churchill and former French Foreign Minister Robert Schuman – was for a European Coal and Steel Community, whose members would pool coal and steel production.

In the famous Schuman Declaration of 1950 – now recognized as the historical start of the project – he said:

"The pooling of coal and steel production… will change the destinies of those regions which have long been devoted to the manufacture of munitions of war, of which they have been the most constant victims."

Cameron Invokes War Memories as He Calls for Britain to Remain in EU
However, 66 on from Schuman, the EU finds itself torn apart.

The Schengen zone is falling apart as countries put up barriers to prevent migrants crossing Europe.

The Eurozone is facing crisis as it struggles to run a single currency with conflicting fiscal policies and differing taxation regimes. Now the controversial EU-Turkey migrant deal is threatening to tear the EU apart even further.

Of the EU-Turkey deal, Verhofstadt said:

"Europe hasn't lost its soul, it has sold it and is now undermining its raison d’être."