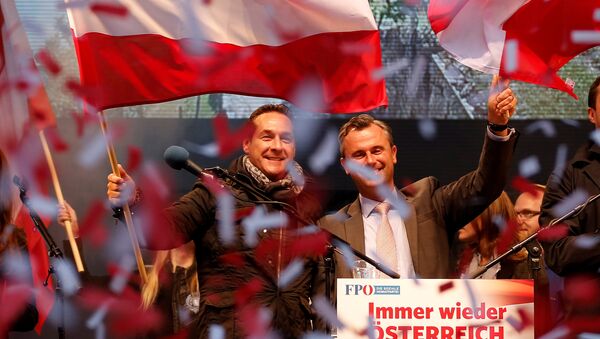 © REUTERS / Leonhard Foeger
Subscribe
The outcome of the second round of the Austrian presidential election, where the two candidates run neck and neck, will highly depend on voters' turnout this Sunday, experts told Sputnik.

MOSCOW (Sputnik) — On Sunday, Austria will hold the second round of its presidential elections, with two candidates competing for the post. The candidate from the far-right Freedom Party (FPO), Norbert Hofer, topped the first round in late April, securing 35 percent of the vote. He will face the Greens-backed Alexander Van der Bellen, who gained 21 percent of support.

“The participation quote of Green voters was only around 68 percent in the first round. So first he [Alexander Van der Ballen] has to raise the participation of green and liberal voters to his benefit," the head of the Austrian polling institute OGM Wolfgang Bachmayer said.

Peter Filzmaier, a political scientist at the Danube University Krems in Austria, shared a similar opinion.

"There will be a lot of voters in the second election who stayed at home in April. In theory this [higher turnout] is van der Bellen chance. But it will be very difficult,” he said, adding that the Green candidate was "about 600,000 votes behind," which is some 10 percent of the electorate.

Bachmayer also added that in order to get some votes from conservative and social-democratic supporters, Van der Bellen had “to loosen his inviting attitude towards immigration.”

Austria Presidential Hopeful Not to Repeat French Far-Right 2002 Defeat
While Hofer has been campaigning on anti-immigrant and anti-EU platform, his rival has been calling on scrapping the caps on migrants, introduced by the government following 90,000 applications for asylum last year.

After Hofer's victory in the first round, unexpected by many politicians as polls had not predicted such level of support, some experts suggested that the main parties, whose candidates had been defeated with 11 percent of the vote each, would rally around Van der Bellen to avoid the far-right victory.

"My personal opinion is that increasing negative comments and warnings from abroad, like 'Austria swinging to the extreme right', would be rejected by the Austrian population and finally they will support Hofer more than van der Bellen," Bachmayer predicted.

The Austrian media agreed not to publish any opinion polls prior to the second round, although some Western outlets published the results of several surveys that predicted a tight race with equal chances for both candidates.