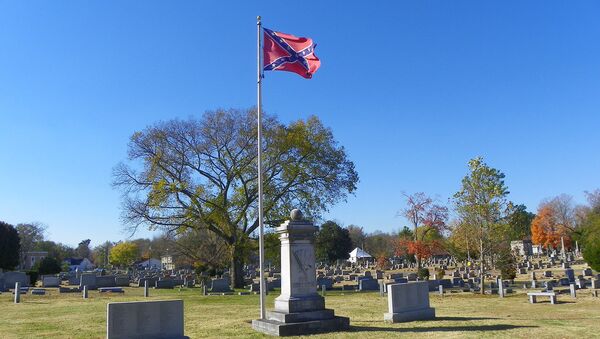 The US House of Representatives approved ban of the Confederate flag at all 147 Veteran Administration cemeteries in the United States.

Confederate Flag Group Charged With Terrorism for Ruining Black Kid's Party
WASHINGTON (Sputnik) — The US House of Representatives passed an amendment preventing the Confederate flag from flying on flagpoles at all 147 Veteran Administration cemeteries in the United States.

US Congressman Jared Huffman representing the state of California offered the amendment to the Military Construction and Veterans Affairs and Related Agencies Appropriations Act of 2017.

Small confederate flags could still be placed on individual graves two days a year, on Memorial Day and Confederate Memorial Day, according to the measure.

Georgia Caves to Pressure, Reverses Ban on Confederate Flag License Plates
The Confederate flag, also known as Stars and Bars, represented the Confederate States of America — an unrecognized confederation of slave-owning states in the south of the United States. The confederation was formed in 1861 in opposition to Abraham Lincoln’s presidential platform that stood against slavery.