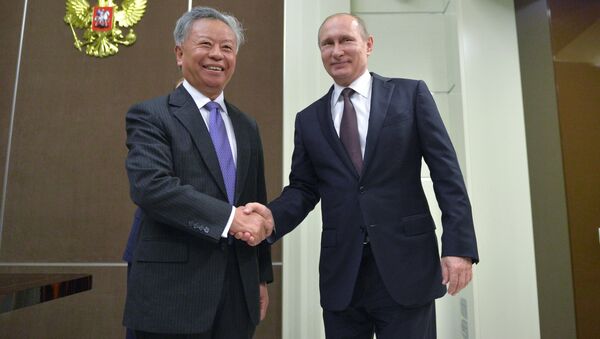 © Sputnik / Alexei Druzhinin
/
Go to the photo bank
Subscribe
AIIB President Jin Liqun said that International financial institutions, such as the World Bank, the Eurasian Development Bank, the European Bank for Reconstruction and Development and the Asian Infrastructure Investment Bank are ready to invest in Russia-ASEAN projects in infrastructure and transport.

“AIIB wants to promote infrastructure investment and investment in mass transport lines in in the vast Eurasian land because we believe if we improve connectivity, the economic potential of the region will be improved. The way of doing it is to mobilize the support of all member-states and international institutions such as the World Bank, EDB and EBRD and other institutions. All of these multilateral institutions are ready to contribute towards connectivity and infrastructure development,” Jin Liqun said, answering a question on possibilities of investment into Russia-ASEAN joint projects.

The AIIB is an international financial institution created to invest in infrastructure projects in the Asia-Pacific region. In October 2014, the Articles of Agreement establishing the bank were signed by 21 states. At the moment there are 57 founding members in the bank, including China, Russia, India, Saudi Arabia, Iran, Germany, France and the United Kingdom.