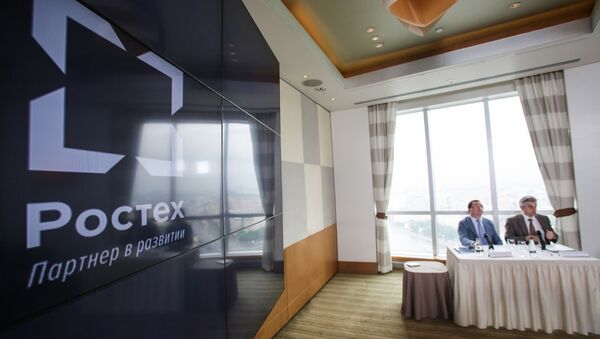 © Photo : Rostec
Subscribe
Russia’s state technology corporation Rostec plans to participate in Britain's Farnborough International Airshow, but the final decision has not been taken yet, according to Nikolay Volobuev, Rostec deputy head.

The UK authorities denied visas to some members of the Russian delegation and journalists, who sought to take part in the 2014 Farnborough International Airshow, indicating the move was due to Moscow’s stance on the Ukraine crisis.

"We are planning [to take part], although a final decision has not been taken yet. We participate in all large international exhibitions. But why should we participate if the same sanctions pressure repeats itself again [this year as in 2014]?" Volobuev told reporters, answering a question on whether Rostec plans to take part in the upcoming airshow.

A Flying Public Relations Blitz? Pentagon Finds Only Good Use for F-35
According to Volobuev, Rostec refuses to take part in any events that could potentially give rise to political incidents.

000000
Popular comments
Forhget west and DON'T trust them one second. The reason U.K is lowering the talk is because it knows it stands to lose TRILLIONS IF Russia ramp up sanctions. They not FOOLS. They been doing this forever often wiping out entire civilizations , tribes, that were all killed and women R..p'd in the Queens name. Just do your own in Russia and prohibit them from coming and participate too. There is a VAST planet that can offer similar shows. BRICS, SCO, ASEAN and more. Why there? And NO ENGLISH.. Write in Russian, then the participants names. Russia is BOWING too much.
cast235
19 May 2016, 17:51 GMT
000000
how much would it generate for Rostec I wonder?
michael
21 May 2016, 12:38 GMT
000000
Newsfeed
0
New firstOld first
loader
LIVE
Заголовок открываемого материала
Access to the chat has been blocked for violating the rules . You will be able to participate again through:∞. If you do not agree with the blocking, please use the feedback form
The discussion is closed. You can participate in the discussion within 24 hours after the publication of the article.
To participate in the discussion
log in or register
loader
Chats
Заголовок открываемого материала
Worldwide
InternationalEnglishEnglishMundoEspañolSpanish
Europe
DeutschlandDeutschGermanFranceFrançaisFrenchΕλλάδαΕλληνικάGreekItaliaItalianoItalianČeská republikaČeštinaCzechPolskaPolskiPolishСрбиjаСрпскиSerbianLatvijaLatviešuLatvianLietuvaLietuviųLithuanianMoldovaMoldoveneascăMoldavianБеларусьБеларускiBelarusian
Transcaucasia
ԱրմենիաՀայերենArmenianАҧсныАҧсышәалаAbkhazХуссар ИрыстонИронауОssetianსაქართველოქართულიGeorgianAzərbaycanАzərbaycancaAzerbaijani
Middle East
Sputnik عربيArabicArabicTürkiyeTürkçeTurkishSputnik ایرانPersianPersianSputnik افغانستانDariDari
Central Asia
ҚазақстанҚазақ тіліKazakhКыргызстанКыргызчаKyrgyzOʻzbekistonЎзбекчаUzbekТоҷикистонТоҷикӣTajik
East & Southeast Asia
Việt NamTiếng ViệtVietnamese日本日本語Japanese中国中文Chinese
South America
BrasilPortuguêsPortuguese
NewsfeedBreaking
21:46 GMTMoscow Expresses Condolences Over Powell's Death, Says He Was 'A Patriot of His Country'
21:34 GMTProduction of Russia's Sputnik V in Mexico to Begin in Second Half of November - Reports
21:28 GMTTreasury to Use ‘Extraordinary Measures’ Through December 3 to Avoid Debt Ceiling
21:12 GMTTop 10% of Richest Americans Own About 90% of Stocks on US Markets - Report
21:10 GMTProject Veritas Source Says Asylum Claims to be ‘Fast-Tracked’ Without Congress Oversight
21:00 GMTChicago Chief: ‘Unvaccinated Cops Face Denied Retirement Benefits’
20:44 GMTTrump Sues House Panel Probing January 6
20:15 GMTDOJ Asks US Supreme Court to Re-suspend Texas’ Anti-Abortion Law After Lower Court Drops Ban
19:41 GMTWhite House Declines to Comment on Report China Tested Nuclear-Capable Hypersonic Missile
19:29 GMTTrump to Give Sworn Deposition in Mexican Protesters’ Lawsuit
19:23 GMTFrom 'Favourite of Presidents' to 'Test Tube Secretary': World Responds to Colin Powell's Death
19:04 GMTUK Daily COVID-19 Cases Almost 50,000 - But are Fatalities Also Rising?
18:48 GMTNATO Regrets Russia's Decision to Suspend Work of Missions
18:25 GMTIran Maintains Huge Arsenal of Missiles, Drones Despite Sanctions, Commander Says
18:25 GMTUS 'Not Pessimistic' About JCPOA Vienna Talks With Iran, But Says They Cannot Go on Indefinitely
17:24 GMTRoma Boss Jose Mourinho Blasts Juventus After Ugly Spat Erupts Between Players of Serie A Teams
17:05 GMTMeet Alexandra Hunt, a Former Stripper Who is Running For US Congress in Pennsylvania
17:04 GMTRemembrance Service for MP Amess in Westminster
16:32 GMTFBI Reportedly Helping Secure Release of 17 Missionaries Taken Hostage in Haiti
16:21 GMTUS Setting Up DHS Migration Monitoring Center to Track Illegal Aliens' Movements, Reports Say