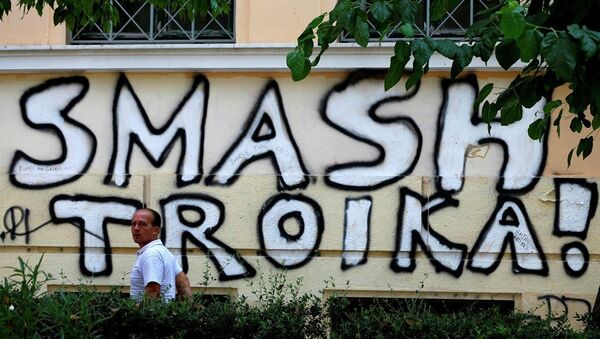 © AP Photo / Thanassis Stavrakis
Subscribe
A leading economic analyst has told Sputnik that the arguments between Greece's creditors over the country’s controversial third bailout program may only be resolved by the EU paying off Greece’s debts to the International Monetary Fund (IMF).

Greece is currently negotiating its way through its third bailout agreement with its creditors – the IMF, the Eurozone and the European Central Bank (ECB) — otherwise known as the Troika. Having had to be rescued a third time, Greece is being given financial support in a series of tranches of money after meeting strict conditions on changes to its fiscal policy.

However, there are disputes between the Troika members over the sustainability of what Greece is being asked to do, with the IMF not putting any money into the third bailout, which it says in "unsustainable."

"I think the IMF has learned the lessons from the previous two bailouts and concluded that it’s very unlikely that Greece will be able to maintain high levels of primary surplus in the next three or four decades, which is a presumption under the current third bailout program."

"The IMF made that proposal, but the Eurogroup meeting a few weeks ago confirmed that the 3.5 percent primary surplus target must be met by Greece and I don’t really see how the IMF and the Eurogroup will be able to come to any form of compromise," Darvas told Sputnik.

​The senior analyst said the best thing to happen would be for the Eurozone and the ECB to roll up all Greece's debts to the IMF – from previous bailouts – and extend them a loan over decades, not years.

"In my view, the most likely scenario is that the IMF will not participate in the third bailout program – financially – and also what is quite likely is that Greece may buy back the existing IMF loans with a new loan from the European Stability Mechanism (ESM), which be very reasonable for two reasons," Darvas told Sputnik.

"The first is that the IMF loans are granted at a very much higher interest rate than the ESM loans. The IMF loan interest rate is around three or four percent, while the ESM can provide a loan at below one percent at the moment.

000000
Popular comments
Once a country is buried in usurious debt there is no way out but Totalitarianism and Oligarchical control as long as the same system is adhered to. World wide usury must be banned and the choke hold of those that collect the interest must be forever broken if mankind is ever to hope for true freedom and sovereignty.