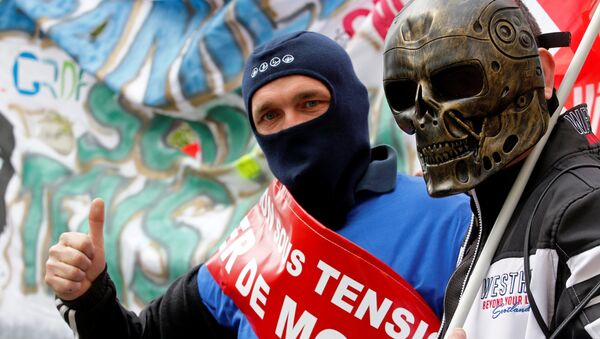 French unions have agreed to hold another round of strikes on May 26 and June 14 against the unpopular labour reforms adopted by the government, seven unions said in a statement.

Up to 400,000 Took Part in Labor Reform Rallies Across France on Thursday
PARIS (Sputnik) – The CGT, FO, FSU, Solidaires, UNEF, UNL, FIDL said in a statement that a "national day of strikes, protests and actions" will be held on May 26," as quoted by La Voix du Nord newspaper on Thursday.

On June 14, the unions will "reinforce the move by a day of inter-profession strike with a national demonstration in Paris" as the Senate will be debating the issue.

The labor bill has given rise to multiple protests across the country in the past months. Among the reforms proposed by Prime Minister Manuel Valls’ government are highly unpopular attempts to increase daily working hours and simplify firing procedures.