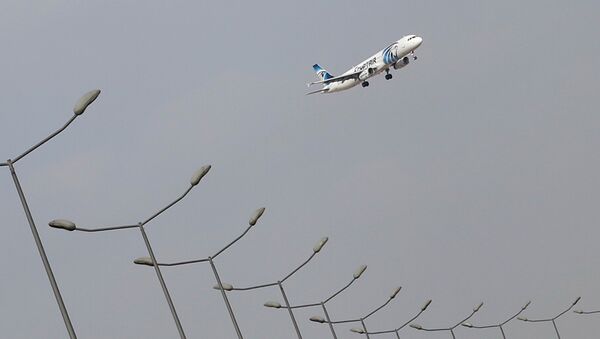 © REUTERS / Amr Abdallah Dalsh
Subscribe
The Egyptian Civil Aviation Ministry has received a letter from the country’s foreign ministry that the wreckage of a missing plane of the EgyptAir airline was found, the airline said Friday.

Two Canadians Among Passengers of Crashed EgyptAir Plane
MOSCOW (Sputnik) – On Thursday, EgyptAir flight MS804 with 66 people on board disappeared from radar screens while flying ten miles into Egyptian airspace. The EgyptAir flight originated from the Charles de Gaulle airport in Paris, France and was heading to Cairo, Egypt.

"EGYPTAIR resource stated that the Egyptian Ministry of Civil Aviation has just received an official letter from the Egyptian Ministry of Foreign Affairs declaring the finding of wreckage of the missing aircraft No. MS 804 near Karpathos Island. EGYPTAIR sincerely conveys its deepest sorrow to the families and friends of the passengers onboard Flight MS804," the statement read.

The Egyptian Foreign Ministry confirmed the wreckage of the missing A320 plane had been found near Greece's Karpathos Island earlier Thursday. Ahmed Adel, a vice chairman of the airline in turn told CNN that the debris found in the sea did not belong to the plane.