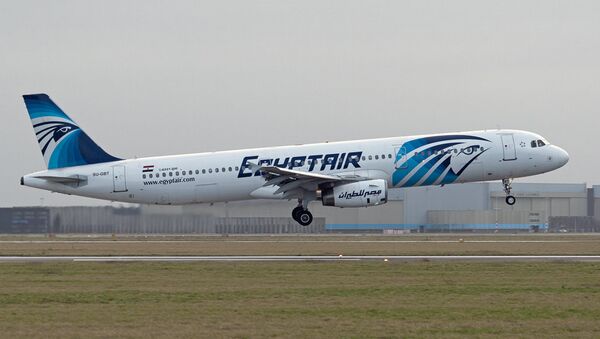 © Flickr / Pieter van Marion
Subscribe
A plane with 56 passengers flying from Paris to Cairo went off radar screens at 00:45 GMT on Thursday, according to Egypt Air.

"An EGYPTAIR official declared that EGYPTAIR A320 aircraft in its flight number MS804 lost contact with radar above the Mediterranean Sea," EgyptAir said on its Twitter page.

Flight MS804, en route from Paris to Cairo, went off radar screens at 00:45 GMT on Thursday, according to Egypt Air.

Egypt Air said via Twitter that the plane was 10 miles into the Egyptian airspace and at an altitude of 37,000 feet when radar contact with it was lost.

An informed source at EGYPTAIR reported that EGYPTAIR Flight No MS 804 has lost communication with radar tracking system at 02:45 (CLT)

​According to Sky News Arabia, the aircraft’s last appearance was above Greece.

"Special teams arrived to search and rescue of the Egyptian armed forces to specified location to search and still searching," Egypt Air said in a Tweet.

According to the airline, there were a total of 66 people on board the plane, including 56 passengers. Earlier reports said that there were 59 passengers and 10 crew on board.

"Egypt Air is following the situation closely with the competent authorities through the integrated operations centre," Egypt Air said via Twitter.

Special teams from the Egyptian Armed Forces were are at site located for inspection and rescue.

​The company also established a hotline for passengers' relatives.

EGYPTAIR has offered toll-free numbers for passengers' relatives as follow:
080077770000 from any landline in Egypt.

​Egypt Air Flight MS804 departed from the Charles de Gaulle Airport in Paris at 23:09 GMT. The plane was headed for Cairo International Airport.

Egyptian aviation authorities are cooperating with the Greek authorities over the plane's disappearance.