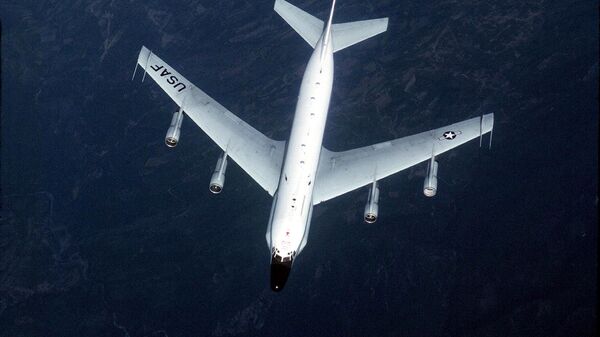 On Monday, US Air Force strategic reconnaissance aircraft RC-135 flew along Russia’s northern borders, according to military flight tracking websites, becoming yet another flight in a string of recent observations; and while some experts refer to it as a “normal practice”, others remind about the risk of confrontation in the Arctic.

World
US Surveillance Plane Reportedly Approaches Russian Border Over Baltic Sea
A RC-135 US Air Force (USAF) strategic reconnaissance aircraft departed on Monday from Britain's Mildenhall Airbase and flew towards the coast of Russia’s northern region of Murmansk, according to the reports of military flight tracking websites.

Previously, such observation flights have primarily been monitored over the Black and the Baltic Seas along Russia’s southern and western borders, but this aircraft targeted Russia’s north.

The scout was accompanied by a refueling plane. The total duration of the flight, taking mid-air refueling into consideration, was estimated at 12 hours, seven of which the plane supposedly spent above the water of the Barents Sea in Russia’s north.

It has become yet another reconnaissance flight in a string of recent observations.

On Sunday, military flight tracking websites reported that the USAF’s RC-135V military transport reconnaissance aircraft had approached the coast of the Kaliningrad region in Russia's west.

World
What Again? US Spy Plane Approaches Russian Border in the Baltic Sea
On May 13, a reconnaissance aircraft with a tail number and the call sign 62-4131 TANGY18 also flew close to the borders of the Kaliningrad region.

On May 10, a USAF strategic reconnaissance aircraft also flew along the coast of the Kaliningrad region.

On April 29, a Russian SU-27 flew in dangerous proximity to an American RC-135 over the Baltic Sea. The incident occurred in international airspace and the Russian pilots performed an aerobatic maneuver.

On April 28, it was reported that Russian MiG-31 fighter-interceptor intercepted the reconnaissance plane of a US Navy P-8 Poseidon and accompanied it at a15-meter distance over Kamchatka Peninsula in Russia’s east.

NATO Expands Along Russia's Borders, Has Gall to Call Moscow the Aggressor
A similar incident occurred on April 14, when a Russian Aerospace Forces SU-27 intercepted an American RC-135 reconnaissance plane over the Baltic Sea and performed a barrel roll, an aerobatic maneuver, above it.

Moscow later explained that the scout was flying towards Russia.

“We have lately started paying more attention to it, writing more about such incidents after our fighters started intercepting these scouts,” he explained.

On the whole, the expert says he does not regard such moves as something dangerous:

“Well, if they want to demonstrate their power, let them, let them spend their fuel, so to speak,” he said.

Russians 'Trying to Send Signal' in Baltic Flyovers – US Navy Chief
On the other hand, Litovkin added, Russia is also watching them. So both countries are simply “doing their job.”

The expert said that the military “competition” between the two countries has always been in place, however nowadays it is becoming more of a public matter.

With regards to the surveillance in Russia’s north, Litovkin said that the Norwegian intelligence vessel Marjata is regularly monitoring Russia’s activity at its northern combat training ranges in the Barents Sea and NATO submarines are also present in the area, so the recent flight might also be “something of the kind.”

Russia
Russian MoD States US Spy Plane Intercepted in Accordance With Int'l Law
However Associate Professor of political science and sociology at the Russian University of Economics Alexander Perendzhiev reminded the website about the risk of confrontation in the Arctic.

“In the nearest future, the battle for the Arctic will come into focus,” he said.

“The fact that they gently sting us in our “underbelly” in our West, in Ukraine – it’s not the worst of it,” he added.

“This does not mean that the main blow will come from there. They are just pulling our resources over there with the sole purpose of eventually getting into an open confrontation in the Northern region,” he said.

“if you do not want to be intercepted, do not fly close to Russia’s borders, or at least switch on the transponder so that we don’t send out fighters every time to intercept an unidentified and potentially dangerous objects.”