A Russian View on US Shale Revolution: It's Over, but Leaves Lasting Impact 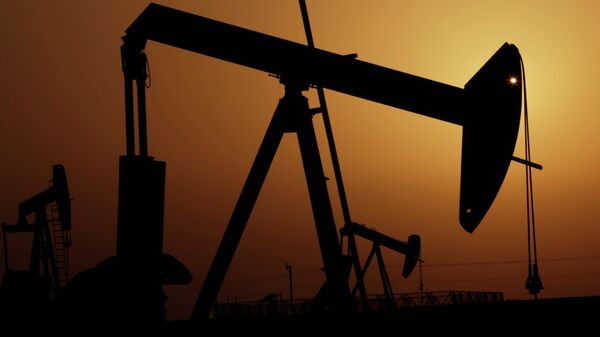 In spite of the recent rise in global oil prices, the US has witnessed a wave of bankruptcies among energy companies engaged in shale oil and gas extraction. Experts speaking to a leading independent Russian newspaper offer their own perspective on the rise and fall of the US shale revolution, and its lasting global impact.

This week, oil prices have continued their upward climb, reaching their highest rates for 2016. The July futures on Brent crude climbed to $49.23 a barrel on Tuesday, while WTI reached $48 a barrel, a price not seen since November 4, 2015.

However, the positive trends, long awaited by many in the energy market, has not benefited everyone equally. CNN prefaced its report on US energy companies filing for bankruptcy with a pun about the "crude reality" being that "oil prices are recovering too late to save many drillers drowning in tons of debt."

Other firms, including exploration and production company Breitburn Energy Partners and the shale driller Penn Virginia were also forced to file for bankruptcy in recent days, bringing total US oil and gas company bankruptcies to 64 since the start of last year (including 29 since the beginning of 2016).

CNN explained that the majority of these companies accumulated their debts when oil prices were above $100 a barrel. Today, shale-based extraction firms are filing for bankruptcy left and right, and this despite the fact that  Goldman Sachs recently announced an 'end of cheap oil' and a possible global deficit in supply.

At the start of the year, The Wall Street Journal predicted that up to a third of US oil and gas companies would be forced to declare bankruptcy or face restructuring by mid-2017. At the same time, potential buyers are waiting for assets to hit the bottom and for debts to be written off.

Commenting on the news, and its implications for the US 'Shale Revolution', independent Russian newspaper Svobodnaya Pressa suggested that steady prices of $45-50 can save the industry from total collapse. "The real question is when this will occur, and whether the global market will be already be occupied by that time," the paper noted.

Blackmail or Protection? Why France Mulls Banning US Gas Supplies
For answers to this question, Svobodnaya Pressa turned to Alexander Pasechnik, the head of the analytical department at the Russian National Energy Security Foundation.

"The bearish operation waged by the countries of the Middle East has led a situation where American companies have found it impossible to hang on any longer," Pasechnik noted. "Shale drillers had held out long enough as it is. But this market sinkhole, especially in January, when prices fell below $30 a barrel, was a shock scenario. The shale drillers tried to hold out, and hoped that this was a temporary reality."

Unfortunately, "we are now seeing a flurry of bankruptcies. Last year, they somehow managed to negotiate with creditors to delay insolvency procedures, but now there are no longer any chances for doing so. It has become too difficult to use falling revenues to repay loans, and this has affected the situation in the industry."

"This," Pasechnik added, "is why the crisis continues to deepen despite the talk about many shale drillers being able to operate with prices at $40-50 a barrel."

"On the one hand, oil shale projects are fairly easy to stop and to revive, and this gives cause for optimism for shale drillers. But in terms of investment, the preceding two-year period of rapidly declining oil prices will not pass unnoticed, and offers a sobering lesson to investors, and hence we'll be seeing the continued inertia-based bankruptcy of US drillers over the next month or two."

Did the Saudis Kill the American Shale Oil Industry?
Asked whether Saudi Arabia may be implicated in plotting to squeeze out US shale producers, Pasechnik said that it can't be ruled out.

"Of course, Saudi Arabia could not reduce the world price of oil by itself. But they did not reduce their output, and the market saw a pattern of a surplus of oil building up. This was done by those who had the commercial advantage, in other words, those who enjoy a low cost of production. And the Americans proved unable to compete with Middle Eastern producers."

Moreover, the analyst added, "the lifting of sanctions against Iran also had an effect. Washington, in deciding to lift the restrictions, factually crashed the oil market. But they were playing their own game as well; standing on their own throats, they were trying to create even bigger problems for Russia. As is known, during the 'fat years', over half of our country's budget depended on profits from oil and gas."

"The US wanted to hit us with a double whammy – sanctions, combined with falling commodity prices. They expected us to be weakened and to exhaust our reserves. But as we have seen, this did not happen, and they have almost collapsed their own shale industry."

Washington's apparent lack of concern for the domestic energy sector can be explained by its dual attitude toward the oil and gas sector, Pasechnik says.

On the one hand, "as a share of the economy and the federal budget, the oil and gas sector is rather small." At the same time, "the country consumes huge amounts of gasoline…Today a gallon of gas costs about two times less than it did in early 2014. From this standpoint, low energy prices are good for the US, since they are also the largest importers of these products. So there are certain advantages in this situation. Their shale sector is collapsing, but in the macroeconomic sense, the US is feeling quite comfortable."

Who is Dipping Into Their Sovereign Wealth Funds Now Oil is Cheap?
For his part, Sergei Pikin, the director of the Moscow-based Energy Development Fund, suggested that the US shale industry has a good chance to recover in the future, but several problems remain.

"Right now we are witnessing the accumulation of huge debts and bankruptcies. But the fact is that the oil fields themselves have not disappeared. They can change owners, and with a change in market trends, can re-enter the market. This can happen with a WTI rate of $50-55, and we are getting close to this rate today."

At the same time, however, "it's not only an issue of low prices, but the fact that the negative trends have increased the appetite for risk and, accordingly, the rates for the risk premium on oil companies within the financial markets."

This, Pikin suggests, helps to explain the uptick in bankruptcies. "Investors are demanding higher profits, and in a situation of low energy prices companies cannot deliver. As a result, they cannot restructure their obligations over longer periods."

Ultimately, the analyst emphasizes that the Saudi-led effort to squeeze out its competitors around the world has not had its intended effect. "The Saudi objective was to remove high-cost competitors from the market." Two years ago, "at prices of $100 a barrel, these competitors could work in peace. But when Brent went down, (and the Saudis estimated that it would drop to $70), they assumed that the more expensive projects would drop off, while they would remain in the black."

Former Russian Deputy Prime Minister Igor Sechin Predicts OPEC’s Death
"But prices fell much lower, down to $27 a barrel, which spooked the Saudis. Riyadh immediately and without any reservations agreed with Russia to put a freeze on production. Of course, this did not happen in the end, thanks in part to the fact that prices have gone up, but it showed that with prices below $30, even Saudi Arabia comes to its senses."

"There's no conspiracy here," Pikin suggests, "- just a struggle for the market. It's difficult to say whether the Saudis have won or not, but one thing is clear: agreeing on output within OPEC is no longer a possibility. From its former role as a regulatory organization, OPEC has turned into an expert-analytical agency, and today every country decides on production without regard for OPEC."