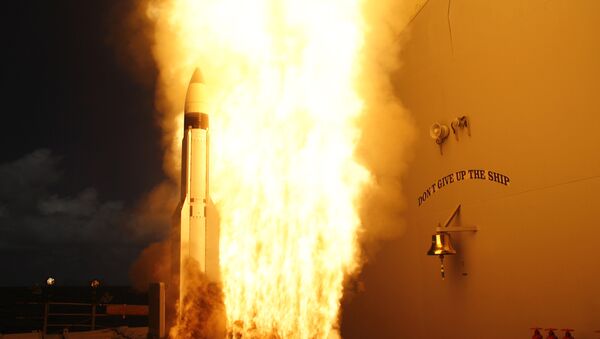 Italian military analyst Manlio Dinucci explains what he believes is the biggest danger emanating from the US deployment of its missile defense network in Romania and Poland.

NATO officials' explanations aside, everyone, including the Russian president, seems to understand perfectly well that the US's shiny new Aegis Ashore missile defense system in Deveselu, Romania, and the one being built in Redzikowo, Poland are directed against Russia.

And the reason, writes Il Manifesto military analyst Manlio Dinucci, is not because the system threatens to intercept Russian ICBMs and put the nuclear balance of power in jeopardy. "The reality," he writes, "is much worse."

US Missile Defense in Eastern Europe: How Russia Will Respond
In the course of his meeting with leaders from Sweden, Denmark, Finland, Iceland and Norway in Washington last week, President Obama reiterated his 'concerns' "about Russia's growing aggressive military presence and posture in the Baltic-Nordic region," and reaffirmed Washington's commitment to collective defense in Europe.

"This commitment," Dinucci recalls, "was demonstrated a day earlier at Romania's Deveselu air base in the form of the inauguration of the US Aegis Ashore land-based missile defense system." 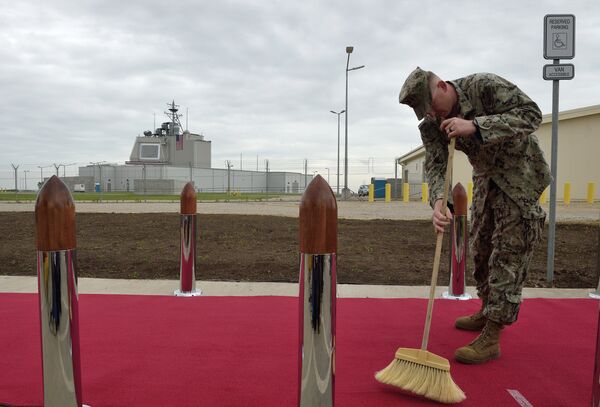 US Army personnel cleans the red carpet ahead an inauguration ceremony of the US anti-missile station Aegis Ashore Romania (in the background) at the military base in Deveselu, Romania on May 12, 2016
© AFP 2022 / DANIEL MIHAILESCU

"NATO Secretary General Jens Stoltenberg, who was present at the ceremony along with US Deputy Secretary of Defense Robert Work and Romanian Prime Minister Dacian Ciaolos, thanked the United States, because with this facility, 'the first-of-its-kind land-based missile defense installation', would significantly increase 'the capability to defend European allies against the proliferation of ballistic missiles from outside the Euro-Atlantic area.'"

Defense or Delusion? The Hidden Motives Behind NATO's East European Buildup
The secretary general "also announced the start of work in Poland on another Aegis Ashore system similar to the one that came online in Romania. The two land-based facilities are an addition to four US Navy Aegis Ballistic Missile Defense ships based at the Spanish base of Rota and deployed across the Mediterranean, the Black and Baltic seas, the powerful Aegis radar installation in Turkey and a command center in Germany."

Speaking at the ceremony, Stoltenberg sought to emphasize that "the site in Romania as well as the one in Poland are not directed against Russia. The interceptors are too few and located too far south or too close to Russia to be able to intercept Russian ICBMs."

"And what is the technology Stoltenberg is referring to?" Dinucci asked. "Both the ship- and land-based Aegis systems feature the Lockheed Martin Mark 41 vertical launching system, using tubes (located in the belly of the ship or in an underground bunker), launching the SM-3 interceptor missile."

Hence, the analyst notes, "this system, called a 'shield', actually has an offensive function. If the US managed to achieve a reliable ABM system, they could keep Russia under the threat of a nuclear first strike, relying on the ability of their 'shield' to neutralize any possibility of retaliation. In reality, this is not possible at this stage, because Russia and even China are now taking a series of measures to make it impossible to intercept all their nuclear warheads in a missile attack. What then, is the US really trying to achieve with its Europe-based Aegis system?"

Why Russia's Reviving Its Nuke Trains
In fact, Dinucci notes, "this is something Lockheed Martin itself openly explains. Illustrating the technical characteristics of the Mark 41 vertical launching system…the company stresses the ability to launch 'missiles for every mission: anti-air, anti-ship, anti-submarine, and to attack ground targets.' Launch tubes can be adapted for any missiles, including the type 'used for defense against ballistic missile attack, and long-range [cruise].' It even specifies the types: 'the SM-3 [interceptor] and the Tomahawk cruise missile'."

"In light of this technical explanation," the analyst writes, "the justification provided by Stoltenberg – that the instillation at Deveselu is deployed 'too close to Russia to intercept Russian ICBMs' is anything but reassuring. Because no one can really know about what kind of missiles are actually deployed in the vertical launchers at the Deveselu base, or on the ships which sail near Russian territorial waters."

Moscow, Dinucci adds, cannot even be certain that the missiles aren't nuclear-armed.

Therefore, the military analyst argues, "the inauguration of the missile defense base at Deveselu may signal the end of the Treaty on Intermediate Nuclear Forces, signed by the US and the Soviet Union and 1987, which facilitated the elimination of land-based missiles with a range of between 500-5,500 km, including the Soviet RSD-10s and the US Pershing 2s and Tomahawks based in Germany and Italy." 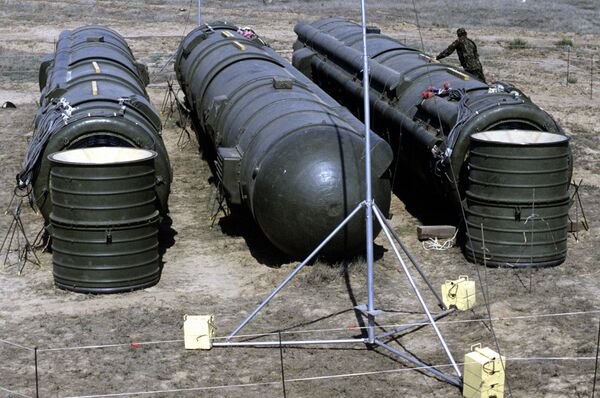 A bundle of three Soviet RSD-10 missiles prepared for demolition at the Kapustin Yar launch site. The missiles were destroyed in accordance with the INF Treaty.
© Sputnik / Vladimir Rodionov

Moscow Has 'Right to Feel Threatened' by US Missile Defense in Europe
"In this way," he warns, "Europe is reverting to the climate of the Cold War, to the advantage of the US, which can use such a climate to increase their influence on their European allies. It's no coincidence that at the meeting in Washington, Obama highlighted the 'European consensus' on maintaining sanctions against Russia, and praised Denmark, Finland, and Sweden and their 'strong support' for the Transatlantic Trade and Investment Partnership, which the US wants to sign by the end of the year."

It turns out "that the Lockheed Martin launchers also contain a TTIP missile," Dinucci concludes.