US Likely to Reject New Repatriation Requests by Yaroshenko, Bout 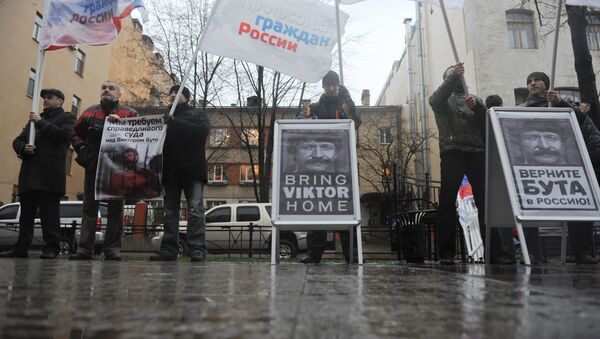 MOSCOW (Sputnik) — Konovalov added that "bilateral agreements between our countries are, in fact, frozen and, taking into account the political dimension to the cases, the US authorities are unlikely to repatriate Bout and Yaroshenko to Russia."

"I do not rule it out, that Yaroshenko and Bout will turn again to US appeals court for repatriation to serve out their sentences in Russia, but  I am not very optimistic about it: we do not have very good relations with the United States in terms of legal assistance," Konovalov said said during a justice forum in St. Petersburg.

'Forget About Human Rights': Yaroshenko No Longer Believes in US Justice
Yaroshenko, a Russian pilot sentenced to 20 years in prison for conspiring to import more than $100 million worth of cocaine into the United States, was arrested in Liberia in 2010 and subsequently extradited to the United States.

Last month, the US Court of Appeals for the Second Circuit ruled that arguments made to reverse Yaroshenko’s conviction lacked merit.  In a March letter to Sputnik, the jailed pilot said the court ignored a lot of evidence that proved US prosecutors and drug enforcement authorities had fabricated the case against him.

Russian businessman Bout, convicted on charges of conspiring to kill US nationals and conspiracy to sell weapons to a designated terrorist group (FARC guerillas) in Colombia, was extradited from Thailand to the United States where he is now serving a 25 year sentence.

Earlier this month, the judge who sentenced Bout said that the verdict in the case was excessive and inappropriate, adding that she handed down the shortest sentence she could possibly give.