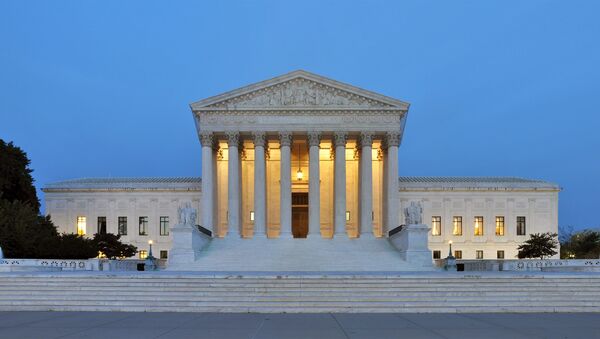 © Wikipedia
Subscribe
Donald Trump, the presumptive Republican presidential nominee for the 2016 US presidential election, released a list of potential Supreme Court appointees on Wednesday, partly to rally the support of a Republican party still unconvinced of his legitimacy.

Some Republicans have publicly burned their voter registration cards and threatened to change their party affiliation in light of Trump’s seemingly inevitably nomination.

Several vacancies on the US Supreme Court may be filled by the next president, and Trump seeks to silence speculation that his appointees will not be sufficiently conservative.

The candidate, at a campaign event in Palm Beach, Florida, said, "I am going to give a list of either five or 10 judges that I will pick, 100 percent pick, that I will put in for nomination. Because some of the people that are against me say: 'We don't know if he's going to pick the right judge. Supposing he picks a liberal judge or supposing he picks a pro-choice judge.'"

Trump added that his nominations would be people "that everybody respects, likes and totally admires. Great conservative judges, great intellects, the people that you want."

Trump reportedly accepted nomination suggestions from conservative groups including  The Heritage Foundation, Republican members of the House of Representatives and The Federalist Society, a legal group.

The Trump campaign claimed the list was drafted "first and foremost, based on constitutional principles, with input from highly respected conservatives and Republican Party leadership."

Interestingly, all 11 of these judges are affiliated with the Federalist Society, with their number featuring only three women and no people of color.

Notably, Sykes, the former wife of radio host Charles Sykes, is a vocal member of the "Never Trump" movement, a group of nearly 40,000 conservatives who have vowed not to vote for the New York billionaire.

Trump said in a statement that the list "is representative of the kind of constitutional principles I value and, as president, I plan to use this list as a guide." He also specifically chose people he felt would be restrictive on reproductive rights, an issue that Trump has been liberal on in the past.

Nan Aron, who head the liberal advocacy group Alliance for Justice, believes that, if appointed, the judges on Trump’s list will result in draconian rulings "Taken together, the records of these potential Trump nominees reflect a radical-right ideology that threatens fundamental rights and that favors the powerful over everyone else."

000000
Popular comments
The US Supreme Court must get back to why is was put in place - upholding the law of the land - The American Constitution. And all its decisions must be based on the law of the land and not what is the current social fad of the time that the current Supreme Court rules on!
terryjohnodgers
19 May 2016, 03:00 GMT
000000
Interestingly, all 11 of these judges are affiliated with the Federalist Society, with their number featuring only three women and no people of color. -- Why do progressives say we are supposed to focus on merit and not color, then they are upset because a certain race quota isn't achieved I thought we weren't supposed to make decisions, hire or have preferences based on race. Isn't that racist?
jas
19 May 2016, 03:05 GMT
000000
Newsfeed
0
New firstOld first
loader
LIVE
Заголовок открываемого материала
Access to the chat has been blocked for violating the rules . You will be able to participate again through:∞. If you do not agree with the blocking, please use the feedback form
The discussion is closed. You can participate in the discussion within 24 hours after the publication of the article.
To participate in the discussion
log in or register
loader
Chats
Заголовок открываемого материала
Worldwide
InternationalEnglishEnglishMundoEspañolSpanish
Europe
DeutschlandDeutschGermanFranceFrançaisFrenchΕλλάδαΕλληνικάGreekItaliaItalianoItalianČeská republikaČeštinaCzechPolskaPolskiPolishСрбиjаСрпскиSerbianLatvijaLatviešuLatvianLietuvaLietuviųLithuanianMoldovaMoldoveneascăMoldavianБеларусьБеларускiBelarusian
Transcaucasia
ԱրմենիաՀայերենArmenianАҧсныАҧсышәалаAbkhazХуссар ИрыстонИронауОssetianსაქართველოქართულიGeorgianAzərbaycanАzərbaycancaAzerbaijani
Middle East
Sputnik عربيArabicArabicTürkiyeTürkçeTurkishSputnik ایرانPersianPersianSputnik افغانستانDariDari
Central Asia
ҚазақстанҚазақ тіліKazakhКыргызстанКыргызчаKyrgyzOʻzbekistonЎзбекчаUzbekТоҷикистонТоҷикӣTajik
East & Southeast Asia
Việt NamTiếng ViệtVietnamese日本日本語Japanese中国中文Chinese
South America
BrasilPortuguêsPortuguese
NewsfeedBreaking
20:30 GMTMemes Flood Twitter After WHO Dubs New Covid Strain Omicron
20:30 GMTOmicron Coronavirus Strain May Already Be in US, Going to Spread 'All Over', Fauci Says
19:34 GMTNCT 2021 Walks Into a Dream in New Teaser Video 'Year Dream: Stage 2 - Surfing in Our Dreams'
19:33 GMTWHO Confirms Some Guesses on Why It Skipped Two Letters and Named New COVID Variant 'Omicron'
19:21 GMTFrance Mulls Autonomy for Caribbean 'Confetti of Empire' Amid COVID-19 Rule Protests
18:54 GMTSolomon Islands Gripped by Anti-China Protests as US Keeps Largely Mum
18:32 GMTRussia is Not Going to Attack Anyone, Ambassador to US Says
18:27 GMTWhy Washington's 'Russian Invasion' Scare is Cover for Kiev's New Offensive Against Donbass
17:22 GMTActor Seth Rogen Mocked Online For Downplaying Crime in Los Angeles
16:48 GMTUK PM Orders Travel Quarantine and Mask-Wearing to Combat COVID-19 Omicron Variant
16:28 GMTBiden Reminded of Attack on Trump for African Travel Ban He Now Emulates
16:21 GMTGamaleya Center Says COVID-19 Antibody Drug Will Not Be Available Earlier Than Late 2022
15:54 GMTRussian Anti-Satellite Weapon Test Makes European Solar Probe's Planetary Flyby More Risky, ESA Says
15:46 GMTMedia Reveals Contents of Safe Holding Secret Documents of UK Royal Family
15:35 GMTRussia Hopes AUKUS Will Abandon Nuclear Submarine Project, Envoy in Vienna Says
15:17 GMTSouth African Hotel Chain Boss Warns of 'Fearmongering' Over New COVID-19 Variant
15:09 GMTFrench Agricultural Ministry Reports Bird Flu Outbreak in Nord Department
14:57 GMTTwo Merchant Vessels Collide in India's Gulf of Kutch
14:36 GMTUS May ‘Pause’ Lethal Aid to Ukraine to Reduce ‘Risk of Confrontation With Moscow’
14:32 GMTFrench Anti-Fascists Hold Demonstration in Paris