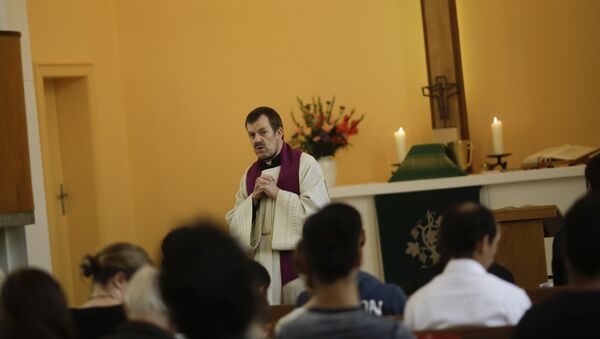 Christian churches in Germany have reported widespread interest from recently-arrived migrants and refugees who want to convert to Christianity, German newspaper Focus reported.

Germany Sends Out Over Half of Failed Asylum Seekers
Some Christian churches in Germany have reported an unexpected blessing from the influx of refugees and migrants into the country over the past year; a number of Muslim arrivals have expressed interest in converting to Christianity.

"At the moment there is a lot of interest," Pastor Michel Youssif from the German-Arab evangelical community in Hannover, the capital of Lower Saxony, told Focus.

"Seven Muslims have already been baptised," said Youssif, himself an immigrant from Egypt who has been working for the pastoral care of migrants to Germany since 2002.

In the nearby town of Winsen (on the Luhe), also in Lower Saxony, two Palestinians also converted to Christianity during the recent festival of Pentacost.

For many, the first contact with the Church is made by telephone or SMS. Evangelical and Catholic churches in the state have been catering to the interest by providing information about Christianity in Arabic and Persian languages, and preliminary courses newcomers can attend before they take the plunge.

Rainer Kiefer, chairman of the evangelical church board in Hannover, said that many of those who are considering the move have already been in contact with Christianity in their home countries.

"It is very important that the decision to convert to Christianity is well thought-out, with the help of pastoral workers," he said, and added that hope of a better chance of being granted asylum in Germany should not be the motivation to convert.

EU to Face 'Populist Uprising' if it is Unable to Handle the Migrant Crisis
Pastor Gunther Oborski told Focus that the church in Hannover has been involved with the pastoral care of Iranian Christians since 1979, and keeps in touch with Christian communities there over the internet.

He said that the increase in migration has resulted in the number of conversions rising to 300 per year.

"There are more baptisms, not only in Hannover but also in the villages where the refugees are based and make contact with Christian communities there," Oborski said.